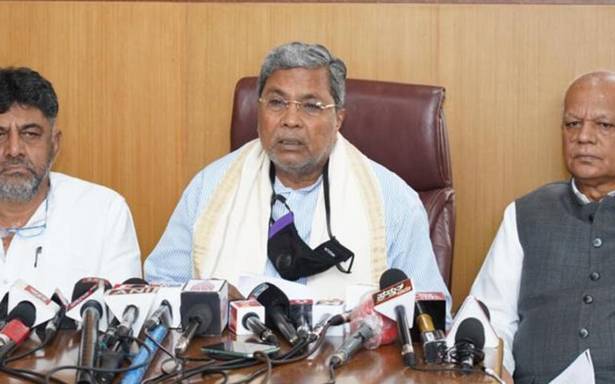 The Congress had to face embarrassing moments even as the principal opposition party was gearing up to oppose the government’s bid to introduce the Karnataka Protection of Right to Freedom of Religion Bill in the Assembly. The ruling BJP furnished documents showing that the draft of a bill on similar lines had been prepared in 2016 by the Congress government led by Siddaramaiah.

Explaining the salient features of the Bill, Law Minister J. C. Madhuswamy maintained that the Karnataka Law Commission had prepared a draft bill on the lines of the Karnataka Protection of Right to Freedom of Religion Bill on the advise of the then government.

Referring to the documents furnished in this regard by the government, Speaker Vishveshwara Hegde Kageri said the Karnataka Law Commission had prepared a draft bill on the advise of the Social Welfare Department. The Bill had been scrutinised by the then law minister T. B. Jayachandra on November 16, 2016.

Later, the then Social Welfare Minister H. Anjaneya had placed the records before then chief minister Siddaramaiah. The Chief Minister had said that the draft bill should be placed before the State Cabinet. However, the bill was not placed before the cabinet, he informed the Assembly.

Mr. Siddaramaiah countered that he had not signed any such document. He insisted that Mr. Jayachandra told him that no such draft bill had been prepared.

The Speaker adjourned the House for some time before inviting Mr. Siddaramaiah and Law Minister J. C. Madhuswamy to his chamber to verify the contents of the documents.

After verification of documents, Mr. Siddaramaiah admitted in the House that such a draft bill had been prepared when he was the chief minister. However, he made it clear that his government had not placed the draft bill before the cabinet. “We did not go ahead with the draft bill. Hence, it is not proper to blame us by saying that we prepared the ground for tabling the present bill,” he argued.

He insisted that the present Bill introduced by the BJP government was drastically different from the one prepared by his government.