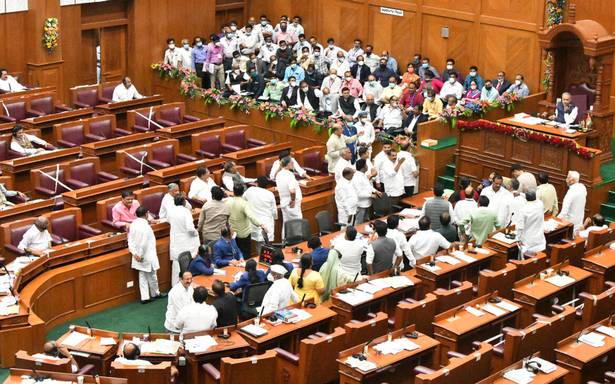 The State Government deferred tabling the Karnataka Protection of Right to Freedom of Religion Bill, 2021 in the Legislative Council during the winter session of the legislature that concluded in Belagavi on December 24.

Minister for Social Welfare and Leader of the House Kota Srinivas Poojary announced that the government will not take up the Bill in this session.

Leaders of both the BJP and Congress were busy calling up members who were heading back to their constituencies, and telling them to return to the House.

Congress member Vijay Singh had travelled about 50 km when he was told to return. Another member M.A.Gopalaswamy, who had gone to Hassan, was also called back.

BJP leaders called back Deputy Chairman M.K. Pranesh and another member Rudre Gowda. Several members who had booked tickets in afternoon flight were told to stay back.

On December 24, Chairman Basavaraj Horatti adjourned the House for lunch while the Assembly had been adjourned sine die before lunch. The House was scheduled to reassemble at 3 p.m.

When there was no sign of reassembling until 4 p.m., Congress members led by Leader of Opposition S.R. Patil entered the Chairman’s chamber and picked up an argument. They alleged that the government was killing time as the ruling BJP was waiting for some of their members to return.

The House reassembled at 4 p.m. Leader of the House Kota Srinivas Poojary proposed to bid farewell to members who are retiring. Congress members opposed the move alleging that it was a strategy to kill some more time. Congress members wanted the House adjourned sine die.

Instead, the Chairman adjourned the House for five minutes and convened a meeting of floor leaders in his chamber. When the House reassembled, Leader of the House Kota Srinivas Poojary announced that the Bill would not be taken up in this session.

Speaking to mediapersons, Congress Chief Whip M. Narayanasvamy said the treasury benches were outnumbered by opposition members. “They were trying to kill time by taking up issues not listed on the agenda,” he said.