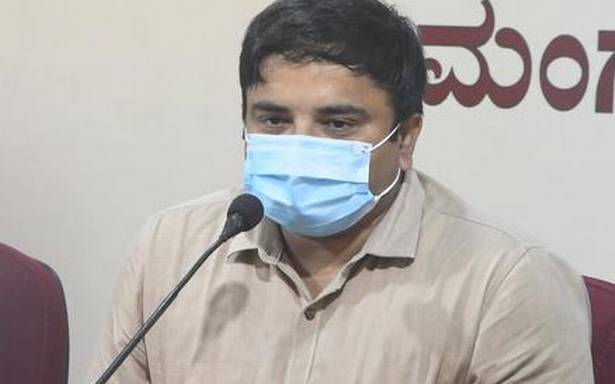 The anxiety of a 25-year-old man from Karwar, who suspected infection by Nipah virus, made health authorities send blood, urine and nasal swab samples to National Institute of Virology, Pune for tests. He has no fever or other symptoms of Nipah, or any other infection, said Deputy Commissioner K.V. Rajendra in Mangaluru on September 14.

“He is perfectly alright. We have sent his samples for testing just to make sure that everything is alright, and not to take any chance,” he added.

Dr. Rajendra said the 25-year-old man works in a Goa-based company that manufactures test kits for COVID-19 and Nipah. On September 8, he travelled in his two-wheeler from Goa to his hometown Karwar when he got drenched in rain. He suffered from fever and headache. He searched the internet, suspected infection by Nipah virus, and approached a hospital in Karwar. He was referred to a private hospital in Udupi and then brought to government-run Wenlock Hospital in Mangaluru.

Dr. Rajendra said there was nothing to worry and he was not a ‘Nipah suspect’. All his vital parameters are stable. His father has been isolated. Health authorities in Udupi and Uttara Kannada district have been told to identify his contacts and isolate them, he added.

District Health and Family Welfare Officer Kishore Kumar was present at the interaction with mediapersons.