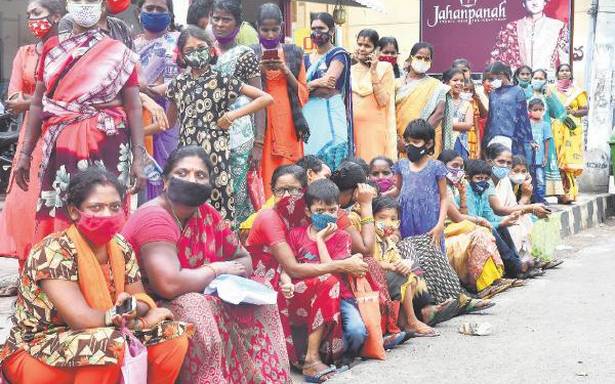 R. Prabhakar, a father of two, had to wait on the road outside one of the Aadhaar Seva Kendras (ASK) in the city for about half a day along with his children and wife on Friday to get all their biometrics updated.

The family which resides in a suburban area of the city came all the way to get their fingerprints scanned (biometric update) for the Aadhaar electronic Know Your Customer (eKYC) process, to continue to get benefits of the rice card as mandated by the Central government.

“We were supposed to be here in the queue by 7.30 a.m. but because of the heavy rain, we got delayed and by the time we reached there was a long queue. We were waiting for our turn for more than two hours and it might take another hour to complete eKYC,” says Mr. Prabhakar.

Like Mr. Prabhakar’s family, many families and individuals throng the ASK run by Karvy, the largest centre in the city for Aadhaar enrolment and other services, every day for the biometric update of all the family members aged above 5.

“I have taken an appointment on the Aadhaar website two days before coming here. My biometric update was completed in an hour. For those who come without a prior appointment it is taking hours,” says Y. Kiran, a youth.

“We have been processing over 600 service requests every day currently and the number touched 800 in the last week. We are doing our best to handle more number of applications in a day to reduce the waiting time in queue,” explains Hari Krishna, manager of the ASK at Labbipet on M.G. Road near IGMC Stadium.

Apart from ASKs, there are about 70 enrolment centres at banks and post offices in the city where biometric update services can be availed. People can make an appointment for services at ASKs on the Aadhaar website while there is no such facility for other centres. Across the State, there are 2,102 Aadhaar centres.

COVID-19 has been one of the major concerns of the people visiting the Aadhaar centres with children, as adherence to safety protocols is not an easy task at such places. But biometrics of children aged between 5 and 15 can be updated only at an ASK.

Concerned about the rush at these centres, the State Civil Supplies Department announced that biometrics updates can be done with ward and village volunteers or ration dealers who have the necessary equipment. However, not many secretariats and fair price shops are providing such a service due to various reasons. As a result, people are dependent on nearby banks and post offices.

Civil Supplies Commissioner Kona Sasidhar recently said that the State government asked the Centre to permit Aadhaar enrolment services at all the ward and village secretariats in the State for the benefit of the people.

According to information, several ward secretariat employees, including digital secretaries and data entry officers, have already undergone the qualification test for Certified Operators and Supervisors of Aadhaar services.

Meanwhile, 3,56,29,373 Aadhaars have been seeded with phone numbers in the State so far, according to the State government officials.