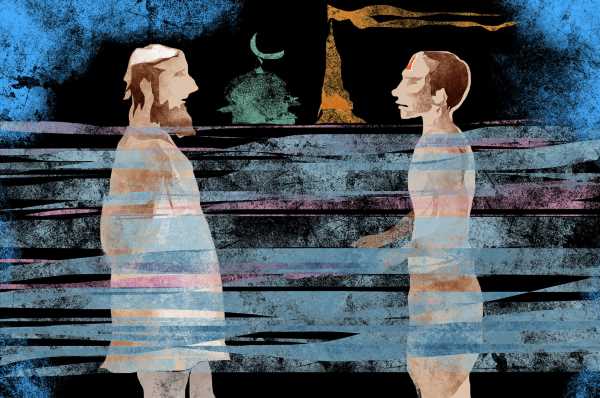 By maintaining that all Indians are tolerant, the Pew centre appears to have skimmed over the surface of its subject matter without delving deep, asserts Amulya Ganguli.

One of the conclusions of the Pew centre’s research on Indian religions is that the Indians are tolerant.

In arriving at this result, the centre appears to have skimmed over the surface of its subject matter without delving deep.

Had it done so, it would have found that the ubiquitous social media which is closely associated with the political discourse gives a contrary impression, for many of the comments of the contributors are marked not only by Islamophobia, but also dislike for other non-Hindu religions.

There is no indication in these observations in the cyber world to substantiate the Pew centre’s assertion that Indians have respect for all the faiths in their country.

Since the intolerance displayed in social media can be discerned in the remarks of some BJP ministers and MPs, the linkage is obvious between the outpourings by Netizens and the political environment in areas where the Hindutva elements are dominant.

True, there has been a decline in anti-minority outbursts on social media in the last few years with those who can be said to belong to the Left-Liberal groups beginning to counter the Right-wing diatribes.

If anything, this latest trend indicates a slow revival of the generally accommodative non-BJP forces which is also reflected in some of the recent election results where the BJP has suffered a setback.

This inclination can be said to be in sync with the US-based think-tank’s findings about the broadminded sentiments prevailing in India.

A conclusion can be drawn, therefore, that the Right-wing voices on the Internet represent an aberration and do not stand for the ‘real’ India.

But the fact remains that by maintaining that all Indians are tolerant, the Pew centre has jumped to conclusions and ignored the existing Right-wing proclivities although these are starkly evident in their speeches and publications and have even manifested themselves in acts of violence such as the lynching of Muslim cattle traders.

As in the case of religion, a penchant for glib assertions can be seen in the ‘finding’ that those who believe that to be truly Indian, it is necessary not only to be a Hindu, but also speak Hindi!

It can appear from this claim that the researchers concentrated more in meeting north Indians, and that, too, mainly of the Hindi or the ‘cow’ belt, rather than those in the south, the west, the east and the north-east.

These are areas where not only is Hindi not spoken at all or spoken in a rudimentary fashion, but is also often not even understood.

The survey is right, however, in concluding that Indians live segregated lives.

But the compartmentalisation relates not only to religion, but is also based on the sectarian preferences of the various communities.

For instance, in New Delhi, Bengalis congregate mostly in Chittaranjan Park in the city’s south while in Kolkata, the Marwaris live in Burrabazar in the north-west of the city.

The tendency is also reflected in marriages since each caste and community want the brides and grooms to be from their own clan.

Even then, the reiteration in the survey of the resistance to inter-caste or interfaith marriages ignores the fact that this stereotype is mostly a rural phenomenon and that barriers of this kind are breaking down in the metropolises.

Not only that, a large number of upper and middle class families today either have relatives living abroad or are married to foreigners.

However, one of the interesting findings is that a majority of Muslims (48 per cent) believe that Partition was ‘a bad thing’ for them.

This perception has historical validity since Partition was the brainchild of the Muslim feudal gentry of a limited geographical location (mainly UP) and had little initial resonance among ordinary Muslims as well as the clerics elsewhere until separatist sentiments were whipped up in the later stages of the pro-Pakistan movement.

However, if Partition is deemed today to have harmed the Muslims, the reason has less to do with the past as with the realisation that the division has not only numerically weakened the community, but also made them the object of mistrust, especially of the Right-wing Hindus who are not very tolerant of the ‘aliens’.

Amulya Ganguli is a writer on current affairs.