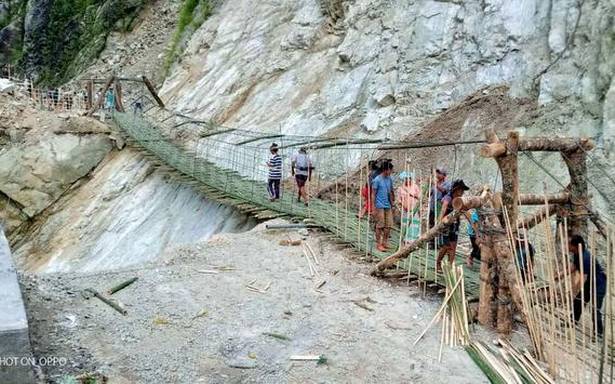 Villagers on either side of a missing 30-metre stretch of the strategic Trans-Arunachal Highway (TAH) waited 15 days for the government to start repairing.

They took turns for a week thereafter to string a ropeway across the gap and reconnect parts of four districts — Siang, West Siang, Upper Siang and Shi-Yomi. Two of these districts border Tibet.

Ropeway strung by villagers across a damaged portion of the Trans-Arunachal Highway at Lelek in Siang district. Photo: Special Correspondent

Many villages and towns in these districts were cut off when heavy rainfall washed away 30 metres of TAH, also National Highway 13, at Lelek in Siang district.

More than a week ago, the people in Pangin and Kebang and adjoining villages decided they could not wait for the State’s Highway Department to start work. Pangin is the circle headquarters about 30 km downhill of the damaged portion of the TAH and Kebang about 20 km uphill.

“People of 10 villages nearest the damaged portion got together to collect local materials and about 50-60 volunteers took turns to string the suspension bridge with bamboo, ropes and aluminium wires over seven days,” Lelek Bridge Construction Committee chairman Tagum Sitang told The Hindu on July 19.

The Power Department provided the high-tension wires to be used temporarily for the suspension bridge that was completed on July 18.

The “temporary” period, villages said, could stretch to six months because of rain and soggy conditions and the repairing is unlikely to take place soon.

“For 21 days, people were forced to climb a steep 50-metre rocky mound near the damaged portion to bring in essentials or carry patients to the only major hospital in Pasighat (headquarters of East Siang district about 36 km away). Scaling and descending from the mound took two hours,” Mr. Sitang said.

“Vehicles are now coming to the safest point near the damaged portion on either side for people to cross over and goods to be transhipped,” he added.

Dabe Perme, the executive engineer of the Highway Division at Pasighat, said they have started work on an alternative road skirting the damaged portion of the TAH that runs more than 2,400 km from Tawang in northwest Arunachal Pradesh to Wakro in the southeast.

“The alignment of the proposed alternative road entails working on 8 km, of which 4.5 km already exists. Earth-cutting is required for 3.5 km. We are through with 2.6 km and hope to provide a usable alternative road within 15-20 days,” he said.

The alternative road will connect Rottung, about 5 km uphill of the damaged portion.

The Lelek Bridge Construction Committee on Sunday submitted a memorandum to Chief Minister Pema Khandu seeking prompt restoration of strategic highways since the armed forces need to move to and from posts and bases along the India-Tibet border.

“The Centre recognises Arunachal Pradesh important from the security point of view. It should ensure that the roads in the State are weather-proof and aligned according to the contours of the hills to be less vulnerable to damage besides affecting the local ecology the least,” Mr. Sitang said.