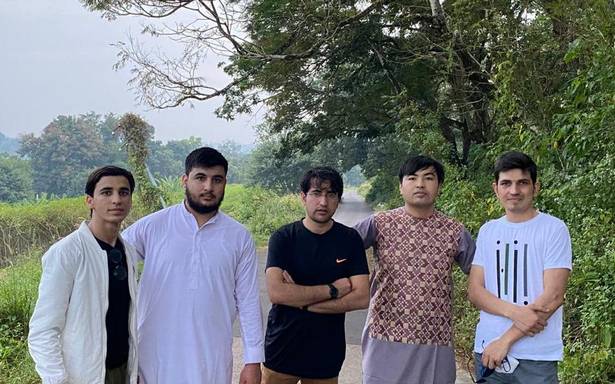 As the Taliban makes rapid advances along the countryside in Afghanistan, 26-year-old Maliha Rahimi fears an era of darkness will return .

She had just started school when the U.S. ousted the Taliban in 2001 following the September 11 terror attacks.

“Today, after two decades of tasting freedom, Afghan women and girls are again scared of a repeat of that dark era of confinement as the Taliban keeps capturing the countryside, and a large number of local people have been displaced to the big cities, where they feel it would be safer. I feel frightened,” she told The Hindu from her house in Kabul.

A postgraduate student of International Relations and Politics in Mahatma Gandhi University, Kerala, Ms. Rahimi left for Kabul last month to join her family members amid the raging pandemic in the State.

Recalling the harrowing days under the fascist Taliban regime, she said that women still remember how they were beaten up by the Taliban for going out alone or for not covering their feet.

“My aunt was once beaten up by the Taliban for not covering her feet properly. As a girl living in Kabul, I am scared of the Taliban, the fundamentalists and the radical religious sections,” she said.

Stating that parents were concerned about their single/unmarried daughters, Ms. Rahimi said that they were getting them married as they had not forgotten the civil war and the Taliban era following the withdrawal of Soviet troops from Afghanistan in 1989.

“I am trying to be optimistic despite all my nightmares of living under Taliban rule, wearing a burqa covering from head to toe,” she said.

Ms. Rahimi is among 11 students from Afghanistan pursuing their postgraduate studies at the university currently as part of an initiative under the Indian Council for Cultural Relations.

Fariba Safi, a postgraduate student of Public Policy And Governance, who is now in Kabul to take care of her ailing mother, pointed out that the situation in her country was worse and Taliban forces had taken control of many provinces.

“A final evacuation of the foreign troops from Afghanistan appears imminent with the U.S. and NATO forces leaving Bagram airbase north of Kabul. Taliban insurgents have captured several districts in Badakhshan province in recent days. Faizabad, the provincial capital, is also in danger. The current unrest has displaced the lives of several people,” she said.

Ms. Safi said that these insecurities and wars had also prevented girls from going to school.

“Women have not been able to continue their duties easily and cannot leave home without their husbands. They remain in a difficult condition and the security situation is deteriorating daily,” she said.

Ms. Safi, whose mother would be discharged from the hospital on Friday, is planning to return to Kerala next week.

Ghulam Farooq Rasuly, second semester student of M.A. Public Policy and Governance, who is now in New Delhi, said that the escalation of the war, withdrawal of foreign forces and the intervention of the countries in the region, especially the opportunistic neighbours, had added to the complexity of the current situation.

“The inter-Afghan peace talks, which got stalled in recent months, have dashed the hopes of a peaceful future for the people,” he said.

Ghulam, a resident of Herat, who had worked as journalist in the western province of the country, said Afghans were tired of war and its dire consequences.

“They see no reason for the continuation of the war in Afghanistan, except the intervention of neighbouring countries. The present situation is complex and unpredictable even for me as a political science student,” he said.

Mohammad Sohrab Noorzaey from Herat, a postgraduate student of politics, said that the Afghan government’s peace process did not yield the desired results.

“It only made the Taliban more powerful, as they re-emerged and recaptured Afghanistan by recruiting people from the Afghan-Pakistani border. However, people in different parts of Afghanistan have taken up arms to fight the Taliban because they oppose the Taliban regime and consider the Taliban to be slaves of Pakistan,” he said.

Said Muslim Sadat, whose family is at the west of Herat province, said the government forces were trying to resist the advancing Taliban forces.

Mr. Sadat fears that the situation may take a turn for the worse in the coming days.

“The Taliban forces attacked the western Herat province three days back. The government forces tried to resist the insurgents,” he said.

Mujahida Safi, a student of M.A Public Policy and Governance, said that the situation at the centre of Kabul was still better.

“But there is war with the Taliban in the provinces. The situation there is not good as many areas are now under the control of the Taliban,” he added.

Mr. Safi said the increase in Taliban attacks after the withdrawal of the U.S. forces was a clear sign that they had a training centre abroad.

“They are getting financial and military support. With the arrival of the Taliban, the achievements of our country will be destroyed, and the nation will be left paralysed,” he added.