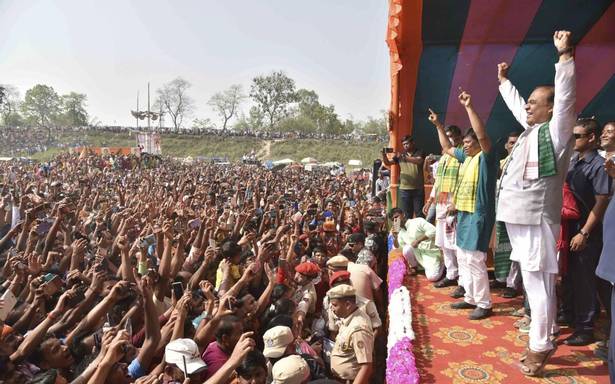 While BJP is loud and noisy, Congress barely rose above a low hum

The tone and pace of campaigns by the BJP and the Congress in Assam could not have been more different. While the BJP is loud and noisy, the Congress campaign barely rose above a low hum.

Former Congress president Rahul Gandhi has had nine public events spread over two months, while Prime Minister Narendra Modi has already addressed four public meetings in the last fortnight and is returning for another on Saturday.

Before the final whistle, Home Minister Amit Shah will hold a roadshow in BJP leader Himanta Biswa Sarma’s constituency Jalukbari in Guwahati on Sunday, the last day of campaign.

Mr. Sarma himself has been barred from campaigning by the Election Commission, taking cognisance of a complaint lodged by the Congress on March 30, alleging that he had threatened Hagrama Mohilary, chairman of Congress alliance partner Bodoland People’s Front, of sending him to jail by misusing the National Investigation Agency.

Voting in the third and the final phase of polling in the State is on April 6.

In the last 15 days, from March 14, the BJP has ensured that every second day, either Mr. Modi, Mr. Shah or BJP president J.P. Nadda is present in the State. Mr. Shah alone has clocked 10 public meetings. Apart from these three leaders, the BJP has done its usual carpet bombing, bringing in U.P. CM Yogi Adityanath, Cabinet Minister Smriti Irani, former Maharashtra CM Devendra Fadnavis and former Chhattisgarh CM Raman Singh, among others.

“Our campaign has worked at two levels. One was at the ground level, keeping in constant touch with our workers, and the second was having multiple public meetings across the State,” a senior BJP leader said.

But all is not well with the BJP. The quiet power tussle between incumbent CM Sarbanda Sonowal and Himanta Biswa Sarma for the Chief Ministerial post is playing out at all levels.

The Congress, on the other hand, has conducted a low-key campaign. In a stroke of bad luck, three rallies of Priyanka Gandhi Vadra had to be cancelled, as she went into self-quarantine after her husband Robert Vadra tested positive for COVID-19.

On March 30, Mr. Gandhi’s three programmes, including a public meeting planned in Karbi Aglong, had to be cancelled because of bad weather. In between the rallies, Mr. Gandhi also managed to visit the Kamakhya Temple.

Chhattisgarh CM Bhupesh Baghel and Rajasthan CM Ashok Gehlot have been making up for their absence. Mr. Baghel, whom the central leadership has appointed as an observer for the State, has been camping around for many months now. He has addressed more than a dozen public meetings.

The Congress campaign also floundered with many missteps. Mr. Modi and other BJP leaders can’t stop taunting the Congress for using pictures of tea gardens of Sri Lanka and Taiwan in their campaign material on social media. Designed Box, which is handling the campaign for the party in Assam, also struggled with language, misspelling “Save Assam” in Ahomiya.