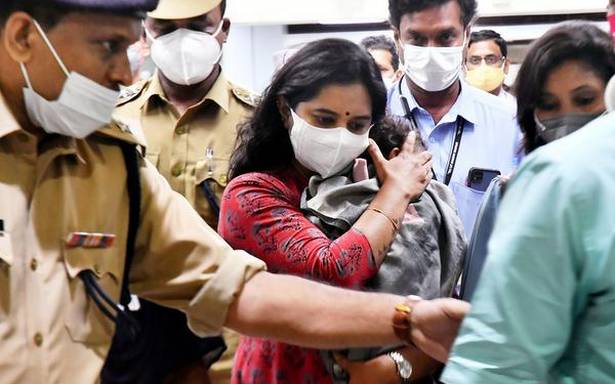 After a day-long journey from Andhra Pradesh, the baby boy, mired in the recent adoption controversy related to Anupama S. Chandran, was handed over on Sunday to a person associated with a child care institution in Thiruvananthapuram to be taken care of.

The infant, believed to be the son of Anupama, was taken from the custody of an Andhra Pradesh couple, to whom the baby was given in foster care, and brought to Kerala around 9 p.m. On reaching Thiruvananthapuram, a team of officials from the Kerala State Council for Child Welfare took the baby to the institution and handed him over to the person identified by the District Child Protection Officer for the purpose.

N. Sunanda, chairperson of the Child Welfare Committee, Thiruvananthapuram, and V. Seethammal, its member, were present while the baby was handed over. Earlier in the day, the Child Welfare Committee met to verify the credentials of the person, who was identified as a ‘fit person’ for taking care of the child. Ms. Sunanda issued the order entrusting the baby to the person after verifying police reports and the track record of the person in handling babies.

The committee had turned down requests from some individuals to look after the baby. The baby will be left in the custody of the selected person till a finality is arrived on the adoption process, sources said.

The committee, as instructed by the Family Court, Thiruvananthapuram, has also made arrangements for determining the parentage of the child. The DNA tests for identifying the biological father and mother of the baby, as demanded by Ms. Chandran and her partner S. Ajith Kumar, are likely to be held at the Rajiv Gandhi Centre for Biotechnology, Thiruvananthapuram, on Monday. The report is expected in a couple of days.

The baby would be handed over to Anupama if the DNA test confirms her as the biological mother. The clearance of the Family Court, where she has moved a petition seeking to get her baby back, will also have to be sought, sources said.