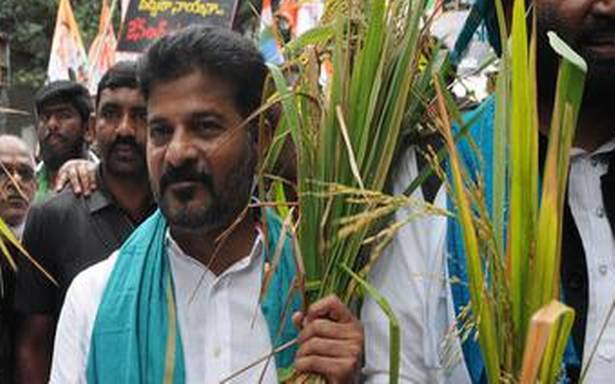 “It is just a year away for the two bosom buddies — Telangana Rashtra Samithi (TRS) and Bharatiya Janata Party (BJP) — to head to the Bay of Bengal and stay drowned there if one goes by the recent utterances and trading of charges against one another, which are just meant for public consumption, and their dubious behind-the-scene manipulations,” said Telangana Pradesh Congress Committee (TPCC) president and MP A. Revanth Reddy on Tuesday.

In a media statement, the TPCC president said that the theatrics that the leaders of the two parties are engaged in, while ostensibly blaming each other, is not missing the eye of the people of Telangana, who are reading between the lines and waiting to serve a deadly blow on both opportunists for their anti-people approaches.

“The so-called arrest of the BJP’s State president Bandi Sanjay Kumar reportedly because he is ‘set to create public unrest’ with his programme at Karimnagar is yet another classic instance of fooling the gullible people. It is not just the Congress party but every individual from Telangana realizes that this is part of a stage-managed drama being enacted by a known betrayer like K. Chandrasekhar Rao and his comrades-in-crime from the State BJP, particularly Sanjay Kumar,” he said. Politically speaking the arrest of Sanjay Kumar is a part of the deal between the two leaders to show that BJP is the primary Opposition in Telangana, he alleged.

“Sanjay Kumar’s arrest was the thanksgiving twist given to the friendship. In return, the BJP, which openly flayed the ‘inept’ KCR administration, praised the State government for the manner the COVID crisis was handled. I am sure that both parties are headed for doom in Telangana. In the next elections the two parties on one side will be shown the route to the Bay of Bengal by the Congress party, come 2023,” he said.

Earlier, Revanth Reddy Tweeted: “DRAMA Starts!! Part-1: Bandi Sanjay Arrest. Part-2: JP Nadda ji to be taken into CUSTODY today. All this to show BJP as the primary opposition in Telangana? Now that I made this Public, let’s watch the drama unfold.”

BJP general secretary B.L. Santosh reacted to this Tweet and said: “Keep tweeting & taunting Sir. When the fire reaches you, you will have only Hussain Sagar to soak yourself in. Good luck. Let’s meet in 2023.”

To this, Revanth Reddy replied: “Telangana understood the bonhomie between TRS and BJP. Both your parties on one side and @incindia on the other.. will show you the way to the Bay of Bengal in 2023.”