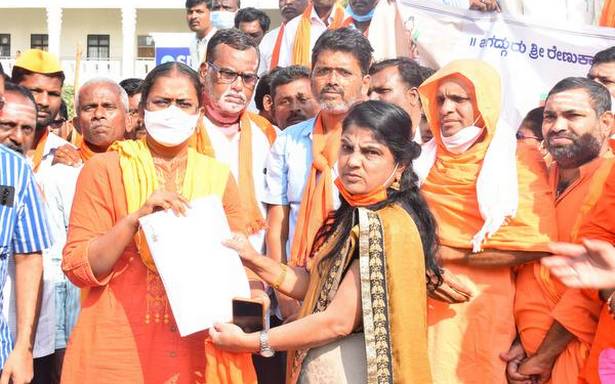 Hundreds of activists of the District Beda Jangama Kshemabhivruddhi Sangha staged a protest in Yadgir on Wednesday against Member of Legislative Assembly P. Rajiv for his opposition to providing Scheduled Castes caste certificate to them.

Convener of Akhila Karnataka Beda Jangama Mahasabha M.P. Sujatha Mathad, who led the protest, said that Mr. Rajiv has given wrong information to the House and opposed giving Scheduled Castes caste certificates to Beda Jangamas who are maintaining cordial relationship with other sects in society while demanding their rights accorded in the Constitution.

“The MLA’s opposition to this is against the concept envisaged in the Constitution,” she added.

The protesters burnt Mr. Rajiv in an effigy at the Subhas Chandra Circle. Later, they submitted a memorandum to the Deputy Commissioner.