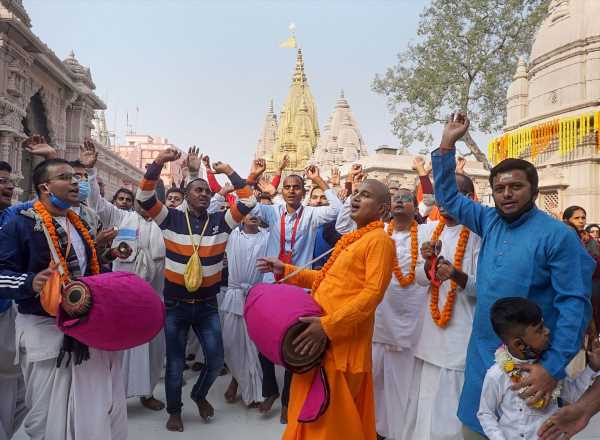 A stone-made sculpture of Bharat Mata against the symbolic backdrop of India, and statues of Maharani Ahilyabai Holkar and saint Adi Shankaracharya have been installed in the sprawling campus of the Kashi Vishwanath Dham, which has been bedecked with flowers for its inauguration on Monday.

Prime Minister Narendra Modi on Monday dedicated to the people the ambitious Kashi Vishwanath Corridor in the heart of Varanasi, a mega project that is expected to boost tourism in the ancient city in a big way, after offering prayers at the ancient temple that draws massive number of visitors from India and abroad.

The mega corridor, whose foundation stone was laid by Modi on March 8, 2019, connects the main temple with Lalita Ghat via a corridor, and grand gateways and ornamental arches have been built in heritage architecture style in four directions, facing the ancient temple at its core.

The corridor project is now being referred to as Kashi Vishwanath Dham.

‘Prime Minister Modi will reach Kashi Vishwanath Dham (Corridor) from the ghat side, and then inaugurate the corridor. He will take a walk in the premises of the new corridor, and see the buildings erected. The event will take place in the presence of a large number of saints and seers from all parts of the country, many of whom have already arrived, and some will arrive tomorrow morning,’ Varanasi District Magistrate Kaushal Raj Sharma said on Sunday.

The current structure of the temple was constructed by Maharani Ahilyabai Holkar around 1780, and in the 19th century, Maharaja Ranjit Singh had got it crowned with golden ‘shikhar‘.

Huge posters of Maharani Ahilyabai have been put up in the premises of the corridors on the occasion, paying tribute to the Holkar queen.

Inside Benaras Gallery, part of the new corridor project, there is a giant mural of Ahilyabai, while on the right side of the route of the corridor emerging from the ghat, a statue of the queen, in a sitting posture, has been installed.

Statue of Adi Shankaracharya has also been put up near her statue.

The sprawling corridor, now also has a stone sculpture of Bharat Mata, with ornamental carvings, and holding a tricolour, standing against the backdrop of ‘India’.

The map of India has been depicted on a metallic surface with art and cultural heritage of the country being depicted on it.

The back of the sculpture faces an old temple, which in turn faces the River Ganga.

The city, the home constituency of Modi since 2014, has been decorated ahead of the mega event — ‘Divya Kashi, Bhavya Kashi’ — especially the streets leading to the holy site, in and around Godowlia Chowk.

Facades of buildings located on streets leading to the shrine have been painted in uniform light pink colour and many buildings have been illuminated.

A total of 23 buildings will be inaugurated on Monday in phase one of the project, the Prime Minister’s Office said in a statement on Sunday.

The project is spread over a massive area of about five lakh square feet, whereas the size of the earlier premises was limited to just around 3,000 square feet.

Despite the Covid pandemic, the work on the project has been completed on schedule, the PMO said.