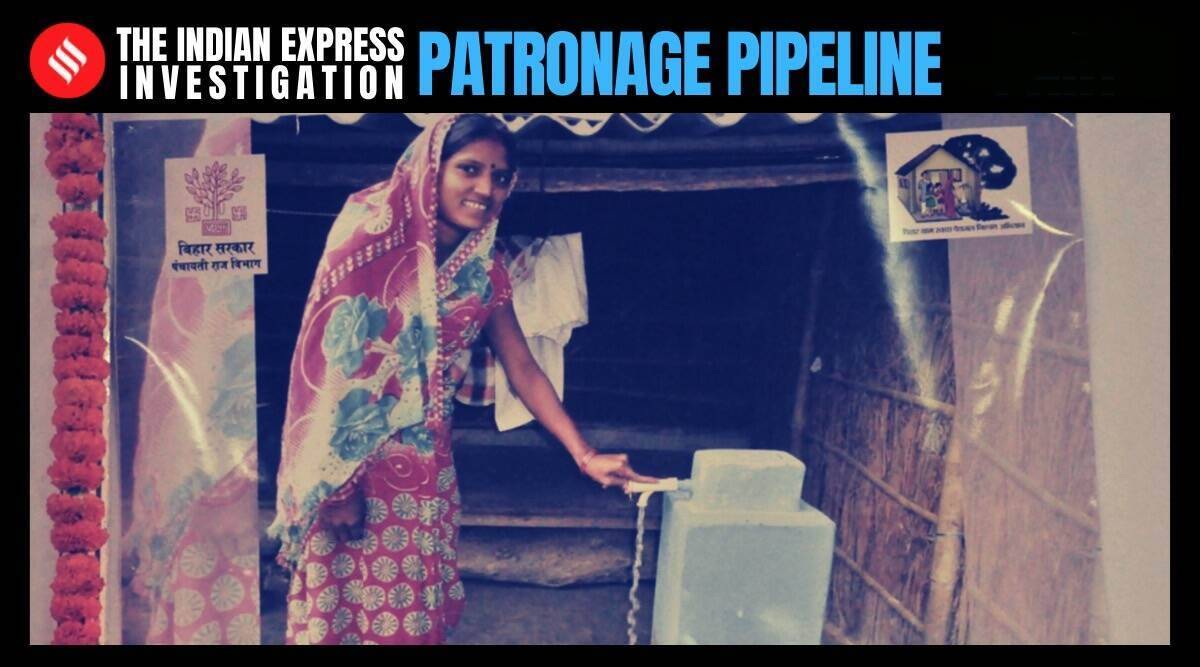 From Samastipur to Madhubani and Jamui to Sheikhpura and at least 20 districts, The Indian Express has found, it covers a sweeping range of beneficiaries across the state’s political spectrum — from relatives of senior JD(U) and BJP leaders to an RJD leader. THERE’S NOTHING wrong in doing business. This was the response of Deputy Chief Minister and BJP leader Tarkishore Prasad when he was asked about the Rs 53-crore Har Ghar Nal Ka Jal projects which, as The Indian Express investigation has found, were awarded to his daughter-in-law and two firms, one linked to his brother-in-law and the other to three aides. Prasad’s is the most high-profile name on a list.

That shows how long is the shadow of political patronage in the award of contracts under Bihar’s flagship scheme to take drinking water to the doorstep.

From Samastipur to Madhubani and Jamui to Sheikhpura and at least 20 districts, The Indian Express has found, it covers a sweeping range of beneficiaries across the state’s political spectrum — from relatives of senior JD(U) and BJP leaders to an RJD leader.

Topping the list, in the amount involved, is JD(U) ex-state secretary Anil Singh’s family, which got contracts worth about Rs 80 crore. Anil Singh is still a key leader in state politics and attends all major functions of the ruling party led by Chief Minister Nitish Kumar. 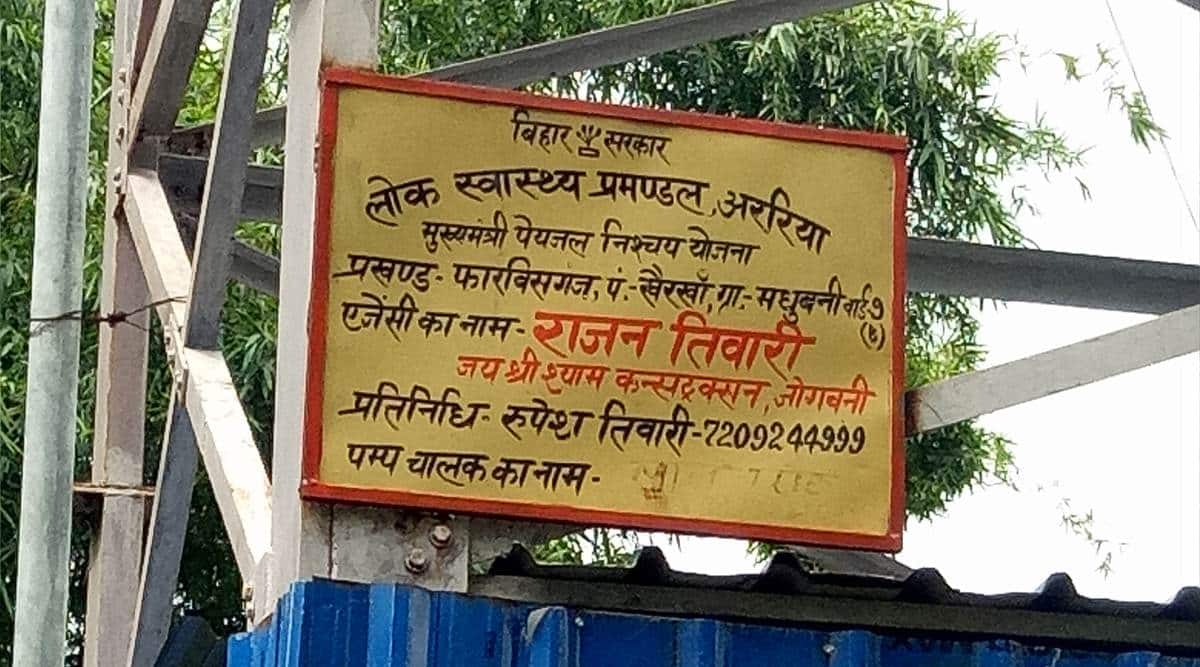 Also on the list: BJP MLA Vinod Narayan Jha’s nephew, who was awarded contracts worth around Rs 3.5 crore in 2019-20 when his uncle was PHED (Public Health Engineering Department) Minister.

Most of the projects under the scheme are implemented by PHED, which disburses Rs 30-57 lakh for each contract to companies or contractors selected through a bidding process. The department gives 60-65 per cent of the contract amount to contractors during the course of work and 35-40 per cent in equal parts for maintenance over five years.

Each project under the scheme involves setting up two plastic tanks of 5,000 litres each on a tower, pumping water to these tanks from a borewell to be maintained by the company operator, and supplying water through a pipeline to a brass tap at a location nearest to the entrance of a house — in each ward.

The Indian Express reviewed bid documents from 20 districts to find that several of these contracts went to family and associates of top political leaders — officials said all of these projects, except one mired in court cases, have been completed:

Records show the contracts were awarded in Singh’s home district Samastipur to two firms: Alectra Infrastate Ltd and Fadle Chem Pvt Ltd. According to Rajesh Kumar Roshan, the PHED executive engineer in Samastipur, 60 per cent of the project cost has been disbursed to both firms. “Both Fadle Chem and Alectra Infrastate have completed the work and have been paid for construction cost as per agreement. But there are some complaints that these two and some other companies are not doing the maintenance work properly,” Roshan told The Indian Express. RoC records show that Ankita Singh, daughter-in-law of Anil Singh, is one of three directors in Alectra Infrastate. The other directors are Ajay Kumar Singh and his son Kunal Kumar, both Samastipur residents and known associates of the JD(U) leader. The company was allotted 11 sets of contracts in 2018-19, each covering 2-4 wards, the PHED official said. The official said the PHED’s project cost for each ward is a minimum of Rs 40 lakh and can go up to over Rs 50 lakh, depending on size and population.

Anil Singh did not respond to queries from The Indian Express. His son Mrityunjay Kumar said: “Fadle Chem got Nal Jal contracts in over 200 wards of Samastipur. We have completed work in most of these areas.”

Bid documents show that Sunil Kumar Jha, a Madhubani-based contractor, was allotted two sets of contracts in the district in 2019-20 worth around Rs 3.5 crore. Jha’s uncle Vinod Narayan Jha, who is now BJP’s Benipatti MLA in Madhubani, was Bihar’s PHED Minister at the time.

When contacted, Vinod Narayan Jha said: “I was not part of the process of awarding the contract…Just because I became a minister did not mean that I would ask my relatives to quit their contract business. If some relatives have got the contracts, they would have qualified through the bidding process.”

PHED contracts awarded to Khushi Construction in which he and his relatives are partners. Cost: Rs 400 crore.

Bid documents show that Khushi Construction, in which JD(U) leader Deepak Kumar, brother Rajiv Kumar and a relative are partners, was awarded contracts in over 900 wards across Purnia, Saharsa, Araria and Sheikhpura.

PHED officials said that about Rs 80 crore was disbursed to the company, which functioned till early 2020 when it faced court cases on charges of alleged violation of contract rules and forgery, and was debarred and blacklisted.

Deepak Kumar was not available for comment. Rajiv Kumar, who holds power of attorney for Khushi Construction, told The Indian Express that the company had complied with all norms to get the contracts. “The matter is in the High Court. Although we have been blacklisted for now, we can still get back the work later,” he said.

Kamal is a registered contractor with PHED and resident of Laxmipur in Jamui. He was allotted three sets of contracts in Jamui. Kamal was not available for comment. Kamal’s project engineer Raman Kumar said: “We have been allotted work in Digghi panchayat of Laxmipur (wards 1,3,4,5,6, 8 and 10), Gauda panchayat of Ghodpadan (wards 4 and 14), and one ward each in Barhat and Paro panchayats. We have completed the work.”

Jai Sri Shyam Construction, owned by Tiwari, got PHED contracts in 2019-20 in 28 wards of Khairkha and Amhara panchayats of Araria. Tiwari is a close aide of Forbesganj MLA Vidyasagar Kesari and Araria MP Pradeep Singh. “I am also a businessman and have tried to do good work as a contractor,” Tiwari said.

PHED contracts in Samastipur. Cost: Rs 4 crore.
Sah, a contractor, got two sets of contracts worth Rs 4 crore in 2019-20. He did not respond to requests for comment.

The other beneficiaries include:

Rishu Singh (son of Ravindra Singh, a PHED office attendant in Sheikhpura): Got contracts in 2019-20 totalling Rs 1 crore in Sanaiya panchayat of Sheikhpura. He was not available for comment.

Mohammed Khalid (brother of Mohammed Sarfaraz, JD(U), Sheikhpura): Got PHED contracts for nine wards of Ariari block in Sheikhpura in 2019-20 totalling Rs 3.6 crore. He said: “I have completed almost 95 per cent of the work. I was allotted the work after following bidding norns”.

Pintu Kumar (brother-in-law of Alok Kumar, Husainabad panchayat mukhiya, JD(U): Got contracts in Husainabad in 2019-20 worth Rs 45 lakh. He was not available for comment.

Mukesh Singh (son of Ramashish Singh, ex-JD(U) leader in Gopalganj): Allotted Panchayati Raj Department work in 12 wards — six each in Vishnupura and Basdiha panchayats — totalling over Rs 1.3 crore. Mukesh Singh said: “I was allotted work in 2016-17 and completed it long ago.”