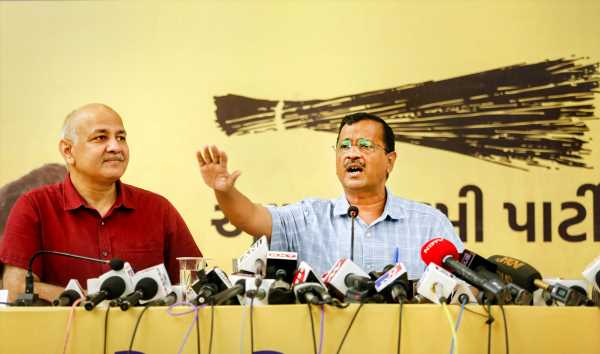 ‘The BJP is scared it may lose the Delhi municipal elections where they have been in power for the last 15 years.’ 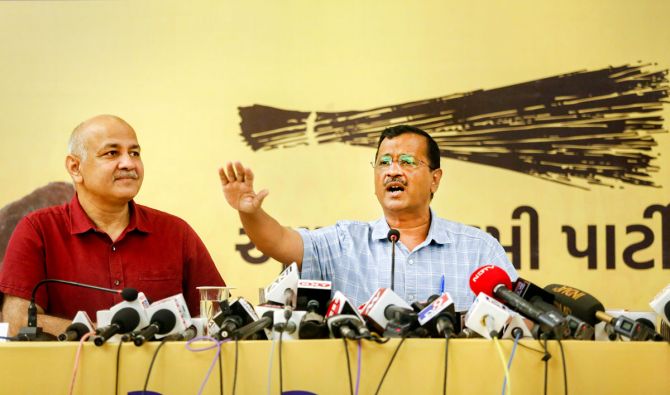 There has been a continuous war of words between the Bharatiya Janata Party and the Aam Aadmi Party over the AAP government in Delhi’s liquor policy.

The BJP has alleged corruption in the policy and accused Delhi Deputy Chief Minister Manish Sisodia of wrong-doing, with the Central Bureau of Investigation promptly raiding his home.

Are these skirmishes linked to the Gujarat assembly election later this year where the AAP hopes to defeat the BJP on its supremos Narendra Damodardas Modi and Amit Anilchandra Shah’s home turf. 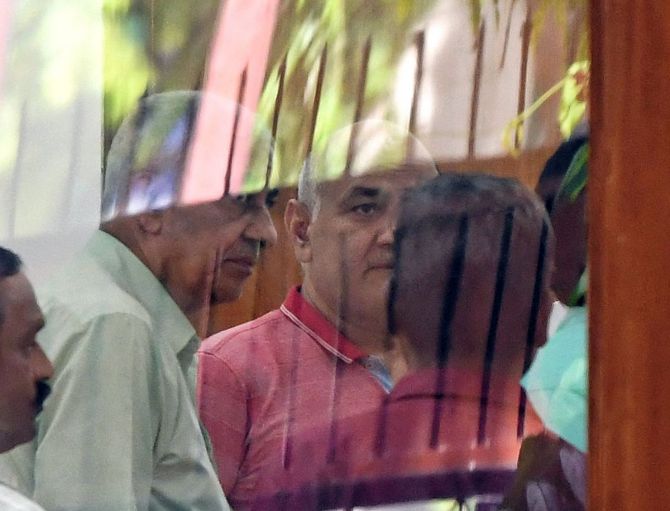 How do you see the clash between the BJP and AAP?

The problem between the BJP and AAP is related to the Delhi Municipal Corporation elections. I don’t think it has got to do anything with the Gujarat elections as many people are saying.

They postponed the elections on the pretext that all three Municipal Corporations of Delhi (MCD) bodies have to be unified into one.

If the BJP loses the MCD elections then they lose their grip over Delhi because in the assembly elections they cannot beat AAP.

However, in Parliament elections they are able to do so and that too twice in 2014 and 2019.

So you are saying that Gujarat is not the main battlefield for AAP and BJP?

If you recall, in the 2017 MCD elections there was strong anti-incumbency against the BJP and then they decided to change all the candidates and give tickets to new candidates. This was the BJP’s masterstroke, after which they won.

Five years down the line, though, the BJP has not done anything in Delhi so that they can go back to the electorate and ask for votes.

Why are the Delhi municipal elections so important?

One has to understand the psychology of Amit Shah and Narendra Modi, as they want to win each and every election. They don’t like losing elections.

Modi and Shah contest elections like gladiators, as if every election is their last election.

If they win, they will survive and if they lose they will die, just like gladiators fought in the arena.

And the same strategy they used for the municipal elections in Hyderabad. J P Nadda, Amit Shah and Yogi Adityanath went to Hyderabad to campaign for the BJP.

And that is the reason the BJP does so well politically, nationally or otherwise also, because no party has that kind of appetite for winning elections.

The BJP goes to any extent to win power, be it small municipal elections or Parliament elections. 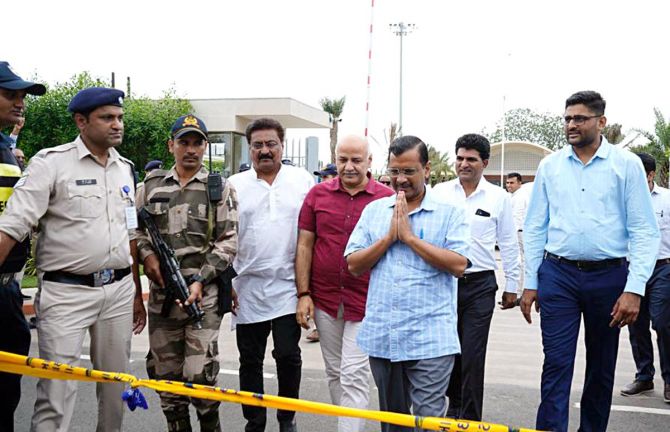 Do you feel AAP is encroaching on the BJP’s Hindu vote bank, which is why it did not speak up against the release of Bilkis Bano’s rapists?

AAP has reinvented itself from what it was when it started in 2013. It was a new political party then, with a new understanding of politics.

At that time they used to say we are here not to be in politics, but to change politics.

Over a period of time they have realised, and especially after Modi’s growing power, that caste and religion are very important while contesting elections.

They have also realised that the way the BJP contests elections by consolidating Hindu votes, any political party which is on the wrong side of the Hindu political mindset will not win elections.

This is one reason why during the 2020 assembly elections, the AAP distanced itself from the Shaheen Bagh anti-Citizen (Amendment) Act protests, or did not utter a word on the Delhi Hindu-Muslim riots.

They have also not done any rehabilitation work for Muslims as they have realised that by getting close to Muslims the optics change for them and therefore they keep away from such issues.

On the contrary, Arvind Kejriwal recited the Hanuman Chalisa publicly to display his admiration for Lord Hanuman.

However, I will say that the AAP is not like the BJP.

How are they different, then?

The difference is in trying not to antagonise Muslims and not antagonise Hindus too.

The reinvention of AAP is to get Hindu votes and to remain in power.

How could AAP keep quiet on the Bilkis Bano issue considering that it was at the forefront of the Nirbhaya case protests in Delhi?

One reason is that Bilkis Bano is a Muslim woman, and therefore they kept quiet.

They do not want to see themselves siding with Muslims nationally, and even in Gujarat.

This is a very shameful stance taken by them because this case was about a woman being victimised, and not a Hindu or Muslim issue.

In the belief system of AAP if they sided with Bilkis Bano, then the Hindu mindset will get upset, but I do not subscribe to this AAP theory as all Hindus don’t think that way. You are completely ruling out Gujarat as the reason for the AAP-BJP battle, but many people say Gujarat will witness tri-party contests between the Congress, BJP and AAP.

I am not ruling out AAP completely, but one has to understand the larger context.

This is not the first time they are contesting the Gujarat elections, Earlier too, they did but then go and check their success rate. It was bad.

They also went to Goa where they got a little more than 6 per cent votes in 2017. In 2022, they got a 0.4 per cent increase in vote share though they won two seats.

In the Uttarakhand assembly elections too, they tried and failed.

Except in Punjab and Delhi, they tried hard, but have not managed to win big.

Gujarat is a very big state with rural areas. AAP did well in the municipal elections in Surat city and I feel AAP might damage the BJP’s prospects in a few urban centres.

Their area of influence is urban centres and the general perception is that they will damage the Congress’s prospects in Gujarat. But I do not agree with that because the Congress is strong in rural Gujarat.

The BJP is strong in the urban centres of Gujarat and if AAP does well marginally in urban centres, then it will damage the BJP’s prospects.

But if one says that the AAP will form a government by damaging the BJP’s prospects, I do not subscribe to this theory.

In Punjab, AAP took eight years to form a government as they started in 2014, and in Gujarat they have just started.

Therefore, to say that they will form the government in Gujarat is a very unlikely scenario. What about Manish Sisodia’s allegation that the BJP offered him the Delhi chief minister’s post if he left the AAP? Could it be true?

Frankly speaking, I do not have any proof, so I can’t say yes or no.

The BJP’s track record has been very bad as they have wooed Opposition leaders to their side and formed governments, like they did in Karnataka, Madhya Pradesh and Maharashtra.

If you go by that track record you can say the BJP is trying to woo Manish Sisodia and on the surface it looks believable.

But can they do it? I don’t think so because out of 62 MLAs they need 42 to split AAP as 42 is the 2/3rd strength required to not attract the anti-defection law.

AAP MLAs might be very unhappy with Arvind Kejriwal, but they know in order to survive they need Kejriwal more than he needs them.

Another thing is that if Manish Sisodia has got the audio call recording of him being offered money to split AAP, why is he not releasing that audio in public?

Taking a bribe and giving a bribe are both crimes and if he was offered a bribe, why did he not file an FIR against the person who called him?

The only outcome of this entire episode was the AAP successfully diverting the issue of the liquor policy to the BJP’s bribery and the AAP’s education policy.

In terms of divisionary tactics, they played a brilliant role by stating that Manish Sisodia would be arrested soon.

Instead of people discussing the liquor policy on which AAP was on a weak wicket, people started discussing the New York Times article in which AAP’s education policy was praised, Manish Sisodia’s Rana Pratap comment and the audio tapes of BJP. They played a brilliant move. 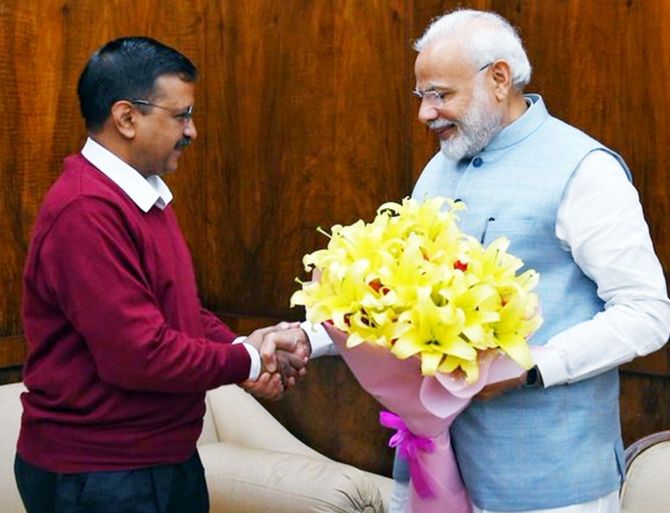 Do you feel there was wrongdoing in the Delhi government’s liquor policy?

There are some serious questions that they need to answer.

When the CBI inquiry was ordered, Manish Sisodia held a press conference wherein he said that he was withdrawing the liquor policy.

A few days back, he was saying there was revenue surplus to the Delhi government because of its new liquor policy.

Now if everything was right with the policy, why did he withdraw it?

He had also stated that if there is any revenue loss, the then lieutenant governor of Delhi (Anil Baijal) would have to be blamed because he had made some last minute changes in the liquor policy.

The question then arises: If AAP had problems with the liquor policy after the LG tweaked it, why did they go ahead with the policy?

This creates suspicion in the minds of people.

Do you think Kejriwal has it in him to take on Modi in the 2024 parliamentary election?

It is what many AAP leaders believe, for sure. They want to create this narrative as it will help AAP spread its wings beyond Delhi and Punjab.

In 2014 they used to say the same thing as they felt AAP would get 100 seats across India, but they got only four seats and that too only in Punjab.

Now with this small number AAP leaders are talking about Kejriwal replacing Narendra Modi who has won more than 300 seats.

AAP leaders can say that Kejriwal will demolish Modi, but that does not resonate well with me.