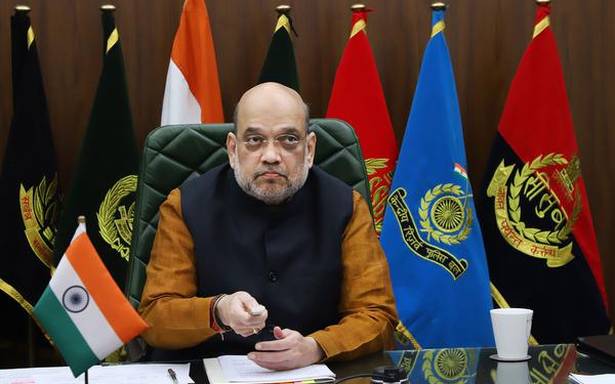 ‘We have ended bandh, hartal and blockade’

Union Home Minister Amit Shah on Monday said the previous governments in Manipur were hand in glove with armed insurgent groups, but under the BJP government, there had been a significant improvement in the law and order situation in the State .

Mr. Shah, who participated virtually in the foundation stone laying ceremony of Rani Gaidinliu tribal freedom fighters’ museum in Manipur, stated that the Centre and the Biren Singh government in the State have brought tremendous improvement in the law and order situation, education, power and other infrastructure sectors.

“Before coming to power in Manipur, we had promised to end bandh, hartal and blockade. We have ended all the three, and significantly improved the law and order situation,” he claimed.

The BJP came to power in Manipur for the first time in 2017. The State goes to the polls next year.

Mr. Shah said, “The people living in hills got power and gas connections, free toilets and saw setting up of schools. The governments of Narendra Modi and Biren Singh brought all these developments. I am sure people will again elect a BJP government to power”.

The Rani Gaidinliu tribal freedom fighters museum will be set up at Luangkao village in Tamenglong district of Manipur, where she was born.

Mr. Shah pointed out that people called her ‘Rani’ acknowledging her role in the struggle against the British.