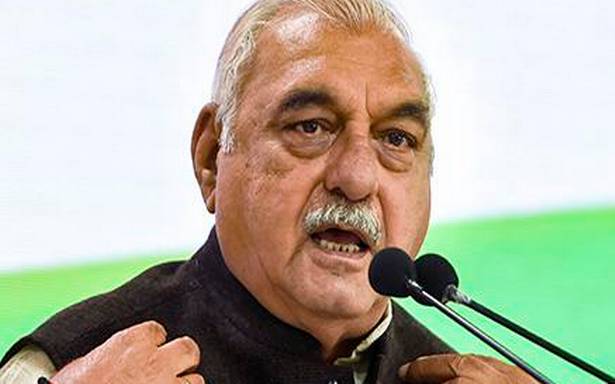 Leader of the Opposition in the Haryana Assembly Bhupinder Singh Hooda on Tuesday hit out at the ruling BJP-JJP coalition, accusing it of adopting anti-people policies that have ruined every strata of society.

Mr. Hooda, who chaired a meeting of the Congress Legislature Party in Chandigarh, said farmers, employees, traders, youth were all suffering under the present government.

“The coalition government of the State is playing with autonomy of universities by interfering in their recruitment. By doing this, the government is violating not only the guidelines of the UGC and the rules of the university but also the new education policy of the Centre,” he alleged.

Mr. Hooda said the posts of about 34,000 teachers are lying vacant in various government schools and instead of paying attention to this, the government is engaged in demolishing the education structure.

“Both the BJP and JJP parties had promised in their election manifestos to buy every grain produced by the farmer at Minimum Support Price but neither millet nor paddy farmers have got the MSP. Farmers are facing acute shortage of fertilizers,” Mr Hooda said.

The former chief minister said, “The health services have collapsed. The Government has not learned any lesson from the COVID-19 pandemic. This is the reason why patients in the State are in bad condition due to dengue. Hospitals do not have proper beds, nor testing and treatment equipment to deal with the disease.”

Mr. Hooda said on one hand the government is claiming to give 75% reservation to the youth of the State, while on the other hand Haryana has reduced the period required for domicile certificate from 15 years to 5 years.

“This will harm instead of benefiting the youth of Haryana. The situation of industrial development in the State is that today unemployment is increasing even in industrial cities like Faridabad. In addition to this, government jobs are also being cut in the State,” he said.

Mr. Hooda said the issue of inflation and rising prices of essential commodities was also discussed in the meeting of the Congress Legislature Party. “The life of poor and middle class families has become difficult today due to inflation. People in Haryana are getting costlier diesel than Punjab, Himachal and Chandigarh,” he pointed out.