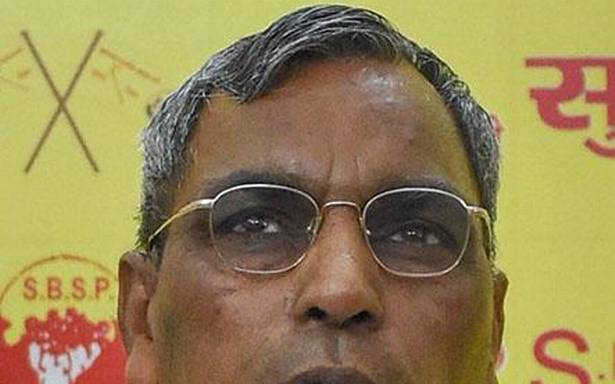 A day after the BJP’s two OBC-based allies in Uttar Pradesh met Home Minister Amit Shah in Delhi, the party’s former ally Om Prakash Rajbhar on Friday accused the BJP of remembering the backward caste people only when elections were near.

When the party has to elect a Chief Minister, it prefers to bring people from outside, said Mr. Rajbhar, president of the Suheldev Bharatiya Samaj Party.

An OBC leader himself, with pockets of influence among the Rajbhar caste in East Uttar Pradesh, Mr. Rajbhar held the post of Cabinet Minister under the Yogi Adityanath government till he rebelled before the 2019 Lok Sabha election and was then unceremoniously removed. Since then, he has managed to stitch together a loose alliance of half-a-dozen odd smaller parties, under the banner of the Bhagidari Sankalp Morcha, including former BSP Minister Babu Singh Kushwaha’s outfit and the AIMIM.

On Thursday, Mirzapur MP Anupriya Patel of the Apna Dal and Sanjay Nishad, president of the Nishad Party, and his son, Lok Sabha MP on a BJP ticket Praveen Nishad, met Mr. Shah.

The Apna Dal, which draws its strength on Kurmi support, has two MPs and nine MLAs in Uttar Pradesh.

Mr. Praveen Nishad said they discussed several issues with Mr. Shah, including rights over the allotment of pattas and fishing rights of the riverine Nishad community and the “appropriate respect” to the Nishad Party. The Nishad Party also raised the demand of the “Nishad reservation.”

Mr. Shah assured the party that he would look into its demands and call it again in a few days, said Mr. Praveen Nishad on his Facebook wall.

Mr. Rajbhar, whose party, sources said, has kept the options of an alliance open with both the Bahujan Samaj Party and the Samajwadi Party, took to Twitter and taunted the BJP’s allies.

“The BJP is a sinking ship. Whoever wants to ride its chariot can do so. But I will not ride it. When elections are near, then they remember the backwards,” said Mr. Rajbhar.

He said he was ready for an alliance with the party that wanted to defeat the BJP.

Party sources, however, said its first preference for alliance was the SP.