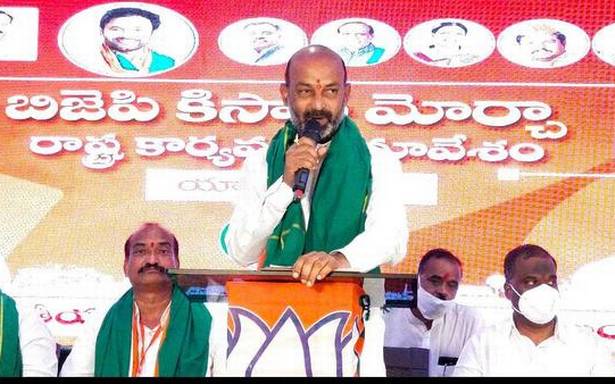 Accuses CM of pushing a rich State into debt

State BJP will increase protests in the coming days for the cause of farmers to put pressure on the government to fulfil the assurances made like loan waiver, free supply of fertilizers, right price for their produce and efficient procurement, said party president Bandi Sanjay Kumar on Sunday.

Participating in the party’s Kisan Morcha meeting at Yadagirigutta, he accused the TRS government of being ‘anti-farmer’, seeking to crush any kind of protest with illegal arrests and repression across the State.

“Farmers’ plight has not changed even after Telangana formation with suicides continuing and the Rythu Bandhu scheme is going waste. We will not keep quiet and will make sure this tyrannical and arrogant regime comes to its knees. My proposed State-level maha padayatra from next month is precisely to understand the issues at the local level,” he said.

He also accused Chief Minister K. Chandrasekhar Rao of pushing a ‘rich’ State into debt, confining new jobs to his family and now auctioning land for revenue. He expressed the fear that even agriculture lands could be sold off in the near future, and questioned the government’s reluctance to spend ₹120 crore released by the Centre for soil testing.

“The Narendra Modi government at Centre, in contrast, had introduced many welfare schemes and subsidies for farmers like ‘Kisan Sanman’. Only those having farmers’ interests in the heart and respect for tillers should be ruling. TS people are waiting for a farmer-friendly government like the one in the Centre. Our efforts from now on will be in that direction,” he said.

Mr. Sanjay Kumar inaugurated the forensics and toxicology department at AIIMS-Bibinagar and assured that he would take up with the Health ministry the matter of changing the name to ‘AIIMS-Hyderabad’ as it would bring certain inherent advantages. He regretted that the State government has been dragging its feet in providing the necessary assistance to make the hospital fully functional by not giving the land documents and preventing expansion plans.

“The third batch of MBBS students will soon be joining but they do not have a building. I request the government to hand over the buildings in the vicinity. Tenders for a new main building will be finalised soon and I would ensure more funds are allocated from the Centre,” he added.