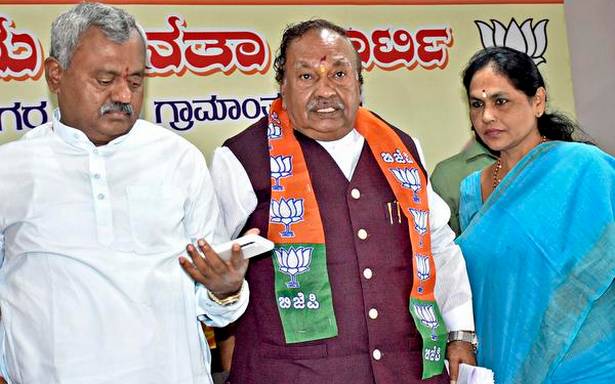 Minister for Rural Development and Panchayat Raj K.S. Eshwarappa on Saturday expressed confidence of the BJP bagging around 16 seats in the elections to the Legislative Council from Local Authorities’ constituencies.

Addressing a press conference in Mysuru, Mr. Eshwarappa said the party had already announced its list of candidates and was hopeful of performing well this time as the number of BJP supported members of the gram panchayat as well as the party MLAs were higher than the previous elections.

Besides, Mr. Eshwarappa claimed that the pro-rural programmes taken up by the centre and the State Government will hold the party candidates in good stead. Already, the party is in majority in the Assembly and by performing well in the coming elections, the BJP will enjoy a majority even in the Council.

Fielding queries from reporters on the allegations made by the State Contractors’ Association that they were forced to cough up huge sums of money as commission for government works, Mr. Eshwarappa said he was ready to look into the complaints of demands for commission for works executed by his department if the complaint came to him.

“If they let us know which official or elected representative demanded commission, we will have it inquired and take action,” Mr. Eshwarappa said before rejecting former Chief Minister Siddaramaiah’s charge that the BJP Government was immersed in corruption. “It was the erstwhile Congress Government which was a ‘percentage government’, he said.

To another question on the delay in taluk and zilla panchayat polls, he said the election to the local bodies will likely be held in February-March 2022 after the completion of the delimitation process.

Mr. Eshwarappa also took exception to Mr. Siddaramaiah accusing a section of the party workers from Chamundeshwari for allegedly conspiring to defeat him in the last elections and sought to question the former Chief Minister whether he did not feel ashamed of defeating former Minister G. Parameshwara in the earlier election.

Accusing Mr. Siddaramaiah of misusing the Backward Classes, Minorities, and Dalits for realising his political goals, Mr. Eshwarappa said the former Chief Minister had deliberately prevented the release of the report on the caste survey when he was in power.

Mr. Eshwarappa was in Mysuru on Saturday leading a team of ‘Jan Swaraj Yatra’ to mobilise support for the party. After finishing a tour of Chikkamagaluru, Shivamogga, Udupi, and Mangaluru, Mr. Eshwarappa visited Mysuru and Chamarajanagar on Saturday. The team is scheduled to visit Mandya and Hassan before visiting Kodagu. Mr. Eshwarappa was accompanied by Union Minister of State for Agriculture and Farmers’ Welfare Shobha Karandlaje and Co-operation Minister S.T. Somashekar.