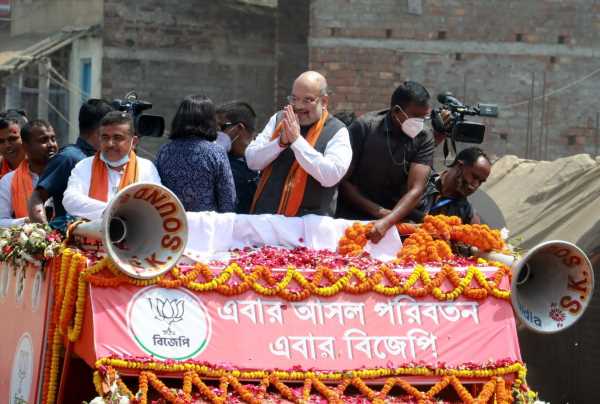 ‘It’s a classic conflict between the old and the new BJP. The new BJP is made up of turncoats and the old of veterans who slogged for decades when the BJP barely existed in West Bengal’

Economist and psephologist Ashok Lahiri possibly got his first taste of realpolitik after he was dropped as a candidate of the Bharatiya Janata Party in the West Bengal assembly elections from Alipurduar under duress.

Lahiri was moved to Balurghat.

The fracas over Lahiri’s candidacy was not an exception.

The BJP faced stiff opposition over its choice of candidates in many places, casting doubts over the leadership’s decision to induct defectors from the Trinamool Congress and the Communist Party of India- Marxist in large numbers and “rewarding” them with tickets, instead of its local representatives.

“It’s a classic conflict between the old and the new BJP. The new BJP is made up of turncoats and the old of veterans who slogged for decades when the BJP barely existed in West Bengal,” a Kolkata-based political observer remarked.

The observation was refuted by a BJP insider who argued: “There’s nothing like the old BJP. We had a marginal presence here and there. It’s a myth to claim we were always a force in West Bengal. We need the so-called outsiders to replenish our ranks.”

While Lahiri’s episode is the stuff of the BJP’s electoral lore, many other serious incidents marred the party’s last-mile connectivity.

Two “nominees”, Shikha Mitra and Tarun Saha, were taken aback when the BJP announced their names from Chowringhee and Kashipur-Belgachia, respectively.

Mitra is the wife of the late Congress leader, Somen Mitra, and Saha, the husband of Mala Saha, the TMC’s sitting legislator from Kashipur-Belgachia.

Both denied joining the BJP or being approached by its leaders before their names were declared.

The political grapevine had it that Mitra’s recent meeting with Suvendu Adhikari, the BJP’s nominee from Nandigram and former TMC heavyweight, set off the speculation that she was “eager” to fight the polls.

Adhikari is a family friend of the Mitras.

“May be she came under the Congress’s pressure,” a BJP source said.

Mala Saha won from Kashipur-Belgachia in 2011 and 2016, but the TMC denied her a ticket this time and fielded Atin Ghosh, Kolkata deputy mayor.

“Perhaps the BJP approached her after this. She might have proposed her husband’s name instead of herself and then backed off,” the BJP source said.

In North Dinajpur, a local leader, Madan Biswas, who heads the BJP’s district OBC wing and is a businessman, alleged that Debasree Chaudhuri, Raiganj MP and central minister, had “worked against” him after promising a ticket in lieu of spending money on sociopolitical activities, including organising “extravagant pujas”.

The ticket went to Krishna Kalyani, a TMC turncoat.

The BJP’s explanation was Biswas spent money “voluntarily” like any businessman and he was never promised a ticket.

Chaudhuri was quoted saying the BJP had objected to Biswas plastering North Dinajpur with his own posters while he was never in the reckoning.

The BJP leadership was unmoved.

“Ours is a disciplined party. Our message to the protesters was if you wish to remain with us, be disciplined, otherwise you are free to quit,” stressed Kailash Vijayvargiya, general secretary minding West Bengal.

Barring Alipurduar, the BJP reportedly has so far not yielded to regional pressure.

A senior state BJP leader’s explanation for the flap over the nominations was: “There are 294 seats but TV is focussed 24×7 on five or six areas, showing groups of 25 or 30 shouting and screaming. All this is gone. A party perceived to be winning witnesses this sort of thing. If a party is not a potential winner, things are quiet on its front. Nearly 95 per cent people want the polls to go on. The rabble-rousers are just 5 per cent.”

A source, however, admitted that Vijayvargiya and Arvind Menon and Shiv Prakash, the sah prabharis (co-minders), had to intercede and hold long meetings with the dissidents before the situation was quelled.

“There was cadre resistance against the nomination of celebrities, film stars, and sportspersons because they are seen as fair weather friends. We told our workers we need them to enhance the BJP’s profile and make it socially acceptable,” the source said.

Kishor Burman, state joint general secretary (organisation), who’s looking after north Bengal, claimed: “Our workers are now looking at the lotus (the BJP’s symbol), the party flag and (Narendra) Modi. The candidates are of secondary importance.”

However, a political observer pointed out that the outcry against some of the nominations could not be “ignored”.

“The BJP’s Chanakyas mismanaged the exercise. There was no due diligence on whether a candidate’s name was on the voters’ list or not, or whether a presidential nominee in the Rajya Sabha was eligible to suddenly join the BJP and contest (Swapan Dasgupta resigned from the Upper House to contest from Tarakeshwar after the TMC raised the issue of rules) or whether Shikha Mitra consented to be a candidate,” the observer said.