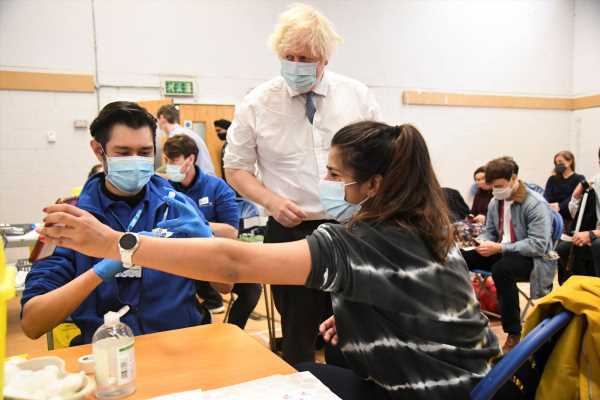 British Prime Minister Boris Johnson on Monday confirmed the UK’s first death from the Omicron variant of coronavirus, the first known fatality from the highly transmissible variant of Covid-19 in the world. Johnson used the case to highlight the importance of not being complacent that the new variant is milder compared to the currently dominant Delta variant and urged people to get their top-up booster vaccine doses, now being offered to all adults aged 18 and over.

During a visit to a vaccine clinic in west London as part of the Omicron Emergency Boost campaign, Johnson also refused to rule out bringing in further restrictions in the coming days and weeks to control the rapid spread of the variant — which has now crossed over 3,000 cases in the country.

“Sadly yes, Omicron is producing hospitalisations and sadly at least one patient has been confirmed to have died with Omicron,” Johnson told reporters.

“So I think the idea that this is somehow a milder version of the virus, I think that’s something we need to set on one side and just recognise the sheer pace at which it accelerates through the population,” he said.

Early data has suggested the new variant, first detected in South Africa, produces only mild symptoms of runny nose, fatigue, headache and sore throat but UK experts have said it could still result in a big rise in hospital admissions due to its sheer rate of transmissibility.

Johnson noted that the new variant now accounts for roughly 40 per cent of coronavirus cases in London alone.

“The risk is plainly there, we can see Omicron spiking now in London and some other parts of the country. Here in the capital it probably represents about 40 per cent of the cases. By tomorrow, it’ll be the majority of the cases and it’s increasing the whole time,” he said.

Asked repeatedly by reporters if he would rule out more lockdown and social distancing measures before Christmas, he said: “Throughout the pandemic I’ve been at great pains to stress to the public that we have to watch where the pandemic is going and we take whatever steps are necessary to protect public health.

“We think the steps that we are taking — so Plan B, combined with a hugely ambitious acceleration of the booster campaign, bringing it forward by a month so we offer a booster to every adult by the end of the year — we think that’s the right approach.”

Johnson was also asked about a reported shortage of the free lateral flow tests (LFTs) distributed by the National Health Service as part of the strategy for all close contacts of a COVID positive individual to test daily and get a confirmatory PCR test if also positive.

“We do have a ready supply of lateral flow tests. If you can’t get one online for any reason, then there are ample supplies in the shops,” urged Johnson, adding that the higher demand shows that most people are doing the “sensible thing” and testing themselves regularly.

It comes as long queues were seen outside walk-in vaccination centres across the UK on Monday with people queuing for their booster vaccine doses, which now have an accelerated timelines to cover all adults by the end of this year.

The enhanced booster rollout is in response to Omicron, after early analysis suggested two doses of a COVID vaccine were not enough to stop people catching the variant. However, a third booster dose gives around 70-75 per cent protection against symptomatic infection with Omicron, analysis by the UK Health Security Agency (UKHSA) found last week.

According to the UK government, currently 10 people are in hospital in England with the Omicron variant, which recorded another jump of 1,239 new cases over the weekend.