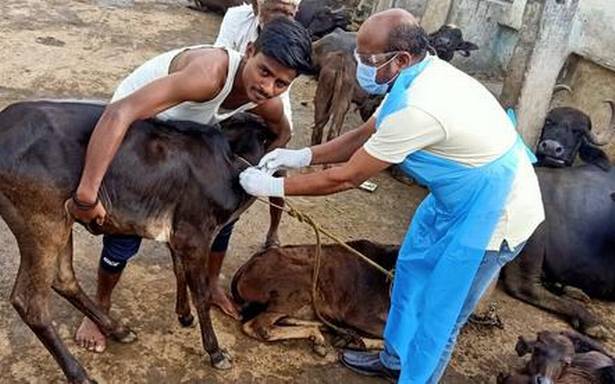 The Animal Husbandry Department in Yadgir has planned to vaccinate cattle and buffalo calves to prevent brucellosis disease under National Animal Disease Control Programme (NADCP), a flagship scheme launched by the Union government.

Around 20,000 cattle and buffalo calves will be vaccinated this year. As many as 3,000 calves have already been vaccinated in the first round which will be on till September 21. The second round will be carried out after four months and the third will be after eight months from the end of the first round, respectively.

“Brucellosis is an infectious disease caused by bacteria. Once cattle or buffalo is infected with brucellosis disease, it will cause abortion or loss of re-productivity,” Assistant Director of Animal Husbandry Department Sharanabhupal Reddy told The Hindu.

The government has chosen to vaccinate cattle and buffalo calves first because it intends to prevent the spread of the disease from animals to human beings and also to prevent economical loss to farmers, he added.