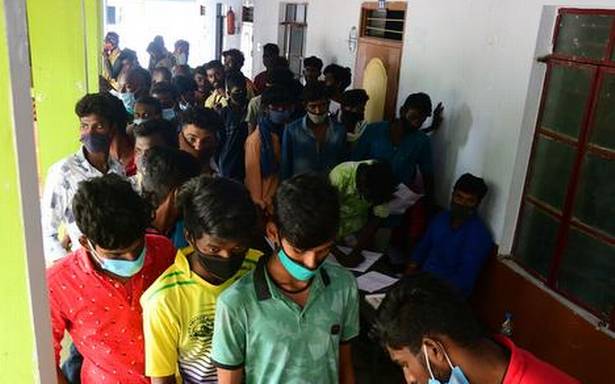 The tamers, aged between 18 and 40, were checked for medical fitness

Bull tamers thronged the Panchayat Union Primary Schools at Avaniapuram, Alanganallur and Palamedu on Saturday to register themselves for the jallikattu events scheduled during the Pongal festival.

Jallikattu will be held at Avaniapuram on January 14, Palamedu on January 15 and Alanganallur on January 16, by ensuring compliance with COVID-19 safety norms. The bull tamers started queuing up at the registration centres from the early hours of Saturday. A revenue official said that circles were drawn inside the schools to ensure compliance of personal distancing norms.

As per the Government Order, RT-PCR tests would be conducted for those participating in Avaniapuram on January 10 and 11; Palamedu on January 11 and 12; and Alanganallur on January 12 and 13. “However, testing negative for RT-PCR tests alone would not guarantee the players to enter the arena. The players will be subjected to another medical check-up before the event. They will be screened to ensure that they are not under the influence of alcohol,” he said.

Speaking to The Hindu, Collector T. Anbalagan said that as per the G.O., a maximum of 300 players could participate at a time in jallikattu. “But we will permit only 75 players in a single batch while following COVID-19 safety precautions,” he said. The bull tamers have to wear face masks while they are playing in the arena, he added.

P. Ranjith, a bull tamer, said that it would be suffocating for bull tamers to wear face masks while playing. “There is still a lack of clarity regarding the rules to be followed during the event. The officials must clarify the doubts of bull owners and players,” he added.