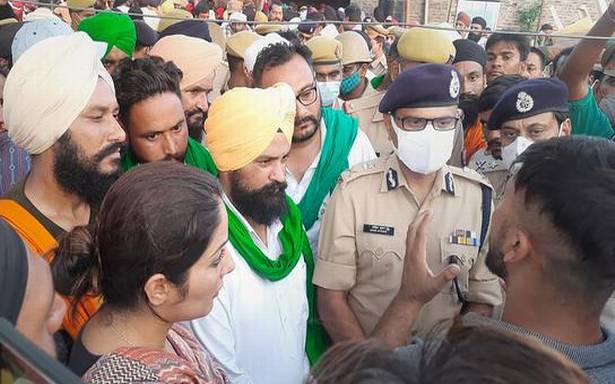 The family of one of the four farmers who was killed in Tikonia in the violent incident involving the convoy of Union Minister of State for Home Affairs Ajay Mishra, on Tuesday demanded that a fresh autopsy be conducted and refused to accept the findings of the post mortem report.

The family of Gurvinder Singh of Bahraich said while the autopsy report showed that he had died of internal injuries, they alleged that he had been shot dead by Ashish Mishra, the Minister’s son while trying to evade agitated farmers after vehicles in the Minister’s convoy had ploughed through the crowd.

Following the family’s complaints, BKU spokesperson Rakesh Tikait said the Uttar Pradesh government had formed a fresh autopsy panel and sent doctors to Bahraich in a helicopter, adding that the Samyukt Kisan Morcha (SKM) was also not satisfied with Gurvinder’s autopsy report.

The cremation of three other farmers was done with the consent of the families, Mr. Tikait said.

Sukhvinder Singh, Gurvinder’s father, alleged that his son died after being shot by Ashish Mishra. “He was shot. Teni’s (Ajay Kumar Mishra) son Monu (Ashish Mishra) shot him. They have presented a wrong autopsy report,” said Mr. Sukhvinder in Bahraich. The family has said they will not conduct the last rites till their demands for a fresh autopsy are met.

Miskeen Singh, Gurvinder’s uncle, told The Hindu that they were sure that he was shot and shared a video in which a round injury mark was present near his temple. The family says the autopsy report does not reflect the bullet injury.

Mr. Miskeen alleged it was being done to protect the Minister’s son, who has already been booked for murder in the car incident, and to make the case “weak.”

Persons claiming to be eyewitnesses in Tikonia said they saw Ashish Mishra sitting in the SUV that moved down the farmers on Sunday and alleged that after his car lost balance, he abandoned the vehicle and fled on foot. While doing so, he fired at Gurvinder who tried to catch him.

In the FIR lodged against Ashish Mishra in Lakhimpur Kheri early on October 4 on the complaint of Hari Singh of Bahraich, it is mentioned that Mishra ran towards the sugarcane fields after his car lost balance and that he was firing shots while trying to hide. Hari Singh, the complainant, accused Ashish of shooting dead Gurvinder.

The FIR was lodged under IPC 302, 304a and under criminal conspiracy among other charges.

Ashish Mishra has, however, claimed that all allegations against him were false and that he was not at the site of the incident but in his ancestral village Banveerpur,a couple of kms away at a wrestling event organized by his father Ajay Mishra in memory of his grandfather.