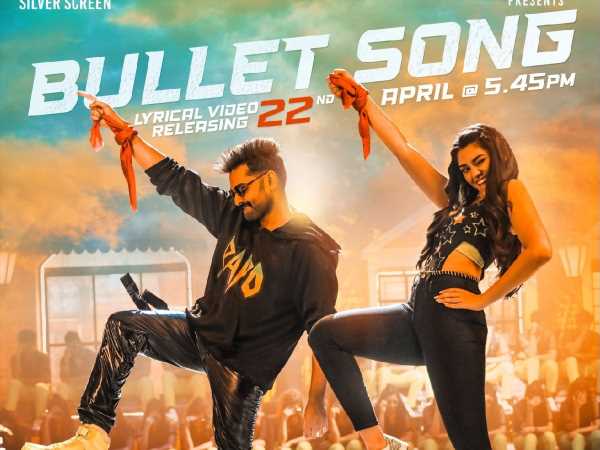 We have already reported that Silambarsan TR aka Simbu is a singing a song for  the young and energetic actor Ram Pothineni‘ next  which is titled The Warrior.  Now according to the latest update,  Bullet Song from Ram Pothineni starrer The Warriorr will be released on 22nd April at 5:45 PM.  The makers confirmed the same  by releasing a new poster that features the lead actors. Bullet song posters promises  a chartbuster with Simbu’  voice and Ram Pothineni and Krithi Shetty’ energetic dance moves.

Both  Krithi Shetty and Ram Pothineni are shaking a leg for Bullet song.  The upcoming bilingual Telugu and Tamil film is helmed by N Lingusamy and is bankrolled by Srinivasaa Chitturi under the banner of Srinivasa Silver Screens whereas Pavan Kumar is the presenter.

Aadi Pinisetty is playing the role of an antagonist. The movie marks the debut of Ram Pothineni in Tamil film Industry.  Apart from the lead actors, The Warriorr  also has Nadhiya, Bharathiraja, Akshara Gowda,  Chirag Jani, and Redin Kingsley in  the important roles.

Ram Pothineni was last seen in action thriller drama Red, the remake of Tamil film Thadam. He has already revealed  that soon he will team up with Boyapati Srinu for a Pan India project  that will be backed by Srinivasaa Chhittur.