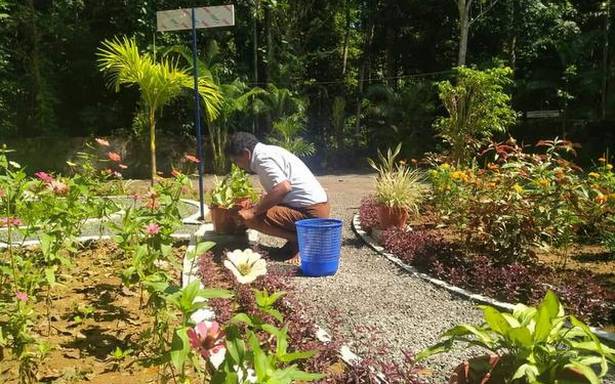 A well-kept garden complete with a water lily pond is perhaps the last thing one associates with a government office. But that is exactly what welcomes visitors at the Malayattoor village office, thanks to the efforts of village officer P.T. Unnikrishnan, who loves to bust the cliché about government offices.

He set up the garden over three cents on the occasion of Gandhi Jayanti last year, when he along with his staff toiled for 12 hours to beautify not just the exterior but the office interiors as well.

“The garden gives positive vibes to employees and the public coming to the office, not to mention the personal satisfaction. I tend to it daily either by coming early to the office or staying back after office hours,” said Mr. Unnikrishnan, who was equally proactive during his stints at Mookkannoor and Asamannoor village offices with his organic farming initiatives.

But it is not just appearances that Mr. Unnikrishnan is determined to change, but the more significant service delivery system as well. He personally supervises a meticulous register maintenance system, which in a village office is usually the preserve of a clerk, realising that prompt access to documents is at the heart of efficient service delivery in a government office.

“That updated subject-wise register is the hard work of 16 days and is now on my table all the time. My fellow village officers used to ask how I manage the system amidst the hectic schedule. It is a bit tough, but then, where there is a will there is a way,” said Mr. Unnikrishnan who joined Malayattoor village office last August.

While certificates are now largely issued through common service centres, people still drop in at village offices to know the status of their applications processed online. “There is the possibility of the laptop freezing, the network being very slow or power outage making a status update impossible when an applicant walks in. To overcome such a scenario, we maintain a register of the status of online applications so that we can update the applicant with the exact date on which the application was processed, cleared, or declined with the reasons thereof and whether the certificate is ready for issue,” he said.

Mr. Unnikrishnan has also been offering free coaching in English and general knowledge for PSC exam candidates. Breaking into nine different rank lists during his PSC training days and the years put in as an English tutor before he eventually joined the service in 1998 have stood him in good stead.