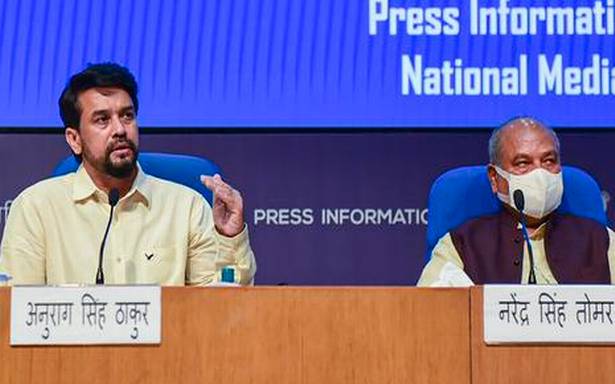 Farmers should end agitation as Centre is committed to strengthening MSP: Tomar

The Centre has decided to allow state-run market yards to access financing facilities through its Agricultural Infrastructure Fund to calm the fears of protesting farmers that such market yards are being weakened.

On Friday, at its first meeting after the reshuffle, the Union Cabinet decided to extend the Central Sector Scheme of financing facility under the Agriculture Infrastructure Fund to State agencies and Agricultural Produce Marketing Committees (APMCs), as well as federations of cooperative organisations, Farmers Producers Organizations and self help groups, according to an official statement. They will now be eligible for interest subvention for loans up to ₹2 crore, with APMCs allowed to access separate loans for different kinds of infrastructure projects to build cold storage, silos, sorting, grading and assaying units in their market yards.

The period of the financial facility has been extended by two additional years up to 2025-26, while the overall period of the scheme has been extended to 2032-33. “The modifications in the Scheme will help to achieve a multiplier effect in generating investments while ensuring that the benefits reach small and marginal farmers. The APMC markets are set up to provide market linkages and create an ecosystem of post-harvest public infrastructure open to all farmers,” said the statement.

Briefing journalists on the Cabinet decision, Agriculture Minister Narendra Singh Tomar said this was proof that “APMC will not end”. The Central government was committed to making APMC more powerful and useful for farmers, he said.

Thousands of protesting farmers have been calling for a repeal of three farm reform laws passed by Parliament last year. One of their concerns has been that by encouraging tax-free agricultural trade outside of the APMCs, the Centre was weakening the APMC system and opening the way for corporate exploitation of farmers. In many States, the APMC yards are also the location for government procurement of crops at minimum support prices (MSP).

“There was apprehension that MSP will be scrapped. However, since the farmers’ protest began, the procurement of foodgrains, pulses and oilseeds has only increased,” said Mr. Tomar.

He appealed to the protesting farm unions to end their agitation and resume talks with the government for possible amendment of provisions in the three laws. However, he ruled out repeal of the contentious Acts.

The farm unions have said they will not participate in such ‘conditional’ talks. They plan to intensify their agitation during the upcoming monsoon session of Parliament.