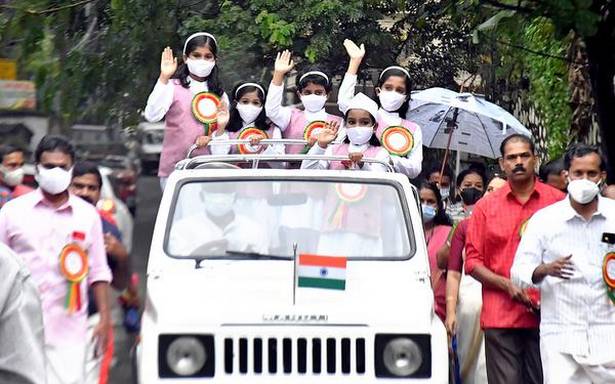 It is up to children to protect the values of equality, democracy and secularism that the country’s first Prime Minister Jawaharlal Nehru espoused. India’s strength lies in its children, Nidhi P.A., children’s ‘prime minister’ has said.

She was inaugurating the Children’s Day celebrations organised by the Kerala State Council for Child Welfare here on Sunday.

Nidhi, student of Carmel Girls Higher Secondary School, said Chachaji, as Nehru was fondly addressed by children, wanted equal justice for all, irrespective of language, colour, religion, and caste. He spoke out against superstitions and evil practices in society and wanted farmer interests to be protected. Every child who loved and respected Nehru should work towards his vision for India. Only this could make the country great.

Children’s ‘president’ Uma S., a student of Government Higher Secondary School for Girls, Cotton Hill, who presided over the function spoke about Nehru’s contributions to democracy, socialism, secularism, scientific consciousness, and foreign policy. He was inordinately fond of children, and firmly believed they were the leaders of tomorrow, she said.

He made primary education completely free and constructed thousands of schools across villages. He launched projects to address malnutrition. Institutions such as Indian Institutes of Technology and Indian Institutes of Managment were founded during his time, she said, highlighting his vision of a new India. Children, she said, should reclaim the India that Nehru had dreamt of, she said.

Addressing children, Mr. Vijayan said the Government’s aim was to maintain Kerala as a child-friendly State.

It was committed to ensuring opportunities for children to play, learn, and grow, and was devising projects with special attention to their physical and mental health.

He emphasised the need for instilling a scientific bent of mind and secular values in children early on in life. They should be made to understand the importance of equality and cooperation. They should be taught to think beyond any discrimination on the basis of caste, religion, gender, language, or region. Children’s Day celebrations should aim at the aforesaid, he said.

COVID-19 presented many challenges for children. However, the Government took the initiative to launch online education for them, and took up protection of the children left orphaned by the pandemic. In the post-COVID world, children should eagerly embrace study, play, and aspire to become the best, the Chief Minister said.

Minister for Women and Child Development Veena George released online the Children’s Day stamp featuring a painting by Akshay B. Pillai, a student from Kollam.

The welcome song was rendered by Nida Fathima.