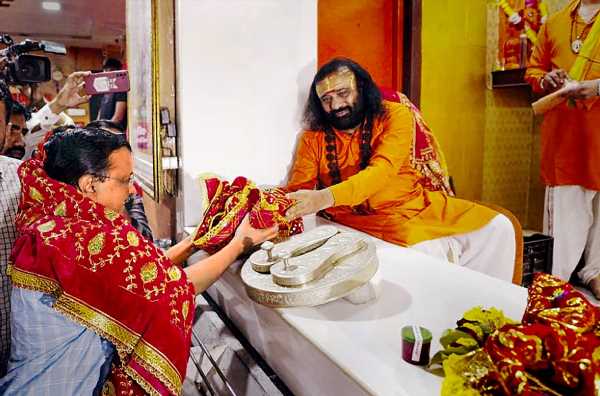 How did Arvind Kejriwal, a one-time votary of secularism, turn into a bargain-basement version of Narendra Modi, wonders Vir Sanghvi.

If Narendra Modi ever gives up being the Hindu Hriday Samrat, who do you think will line up to take his place?

If you answered Amit Shah, you would probably be correct, though there is another obvious candidate: Yogi Adityanath.

And now, there is a new addition to the list of hopefuls: Arvind Kejriwal.

Yes, the same Arvind Kejriwal who once said he stood for secularism and who went so far as to call the prime minister of India a psychopath and a coward on Twitter.

He is now singing a different tune, and sounding more and more like a comic book parody of the man he once called names.

Over the last couple of years, Kejriwal has surely and shrewdly resiled from his original secular positions.

When the Delhi riots took place, many Muslims who had voted for the Aam Aadmi Party looked to Kejriwal for sympathy, if not support. He kept quiet.

Kejriwal has since avoided commenting on all Hindu-Muslim issues, has bragged about knowing the Hanuman Chalisa and has tried to associate himself with the Ayodhya movement.

Last week, he went further, saying that our economy would only improve if ‘devi-devatas’ looked down on us and gave us their aashirvad. Therefore, he said, the Indian economy would flourish if pictures of Lord Ganesh and the Goddess Lakshmi were printed on our currency notes.

Kejriwal thought this was an important enough insight to hold a press conference to make this request and streamed it live on his Twitter feed.

Behind his chair hung a picture of the atheist Bhagat Singh who would certainly not have endorsed this idea.

And even more ironically, there was also one of B R Ambedkar.

Just weeks ago, Kejriwal had forced out a Dalit minister in the Delhi government who was present at a function where Ambedkar’s 22 oaths were taken.

The Bharatiya Janata Party called this an anti-Hindu activity. Kejriwal, rather than standing up for Ambedkar whose pictures he puts up everywhere, promptly sacked the minister.

What is going on here? How did Kejriwal, a one-time votary of secularism turn into a bargain-basement version of Narendra Modi? One word: Gujarat.

After its victory in Punjab, the Aam Aadmi Party now has national ambitions. And it believes that it stands a good chance in Gujarat. But as the Gujarat electorate appears to be Hindu-leaning, why not offer Hindutva-lite and combine it with promises of better delivery of governance and services?

It is possible that this formula will help the AAP win Gujarat, though frankly, I believe this is unlikely. But what it tells us about the AAP and about Kejriwal personally is that he is willing to embrace Hindutva politics at their most banal level simply to get ahead. Does the man actually believe in anything? The short answer appears to be:

Yes, he believes in his own advancement. And that’s about it. 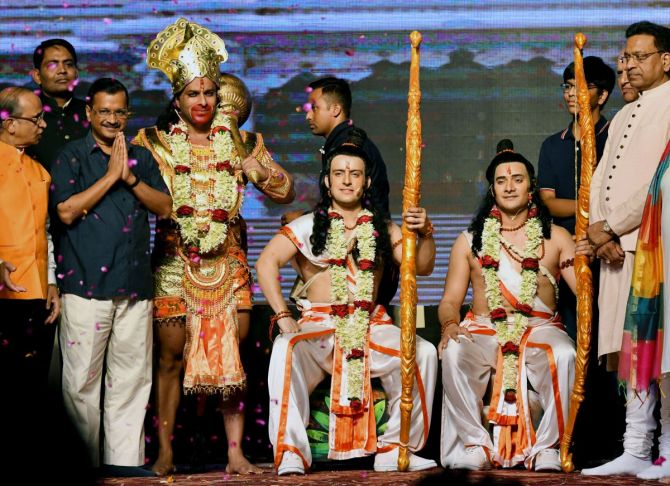 At a time of communal tension that is unprecedented in India’s post-Independence history, with a frightened and worried Muslim minority, what kind of politician suddenly changes direction and decides to play Hindutva politics at a junior league level?

Kejriwal’s critics have long alleged that he has no core principles, that he will do or say anything to get ahead. Where other people have a conscience, he has only ambition.

This may be too harsh, but his record does suggest that his style is to spot an opportunity and then exploit it, regardless of ideology or principles.

He made his name during the India Against Corruption agitation. Even if you don’t accept the Congress charge that the crowds at his rallies were provided by the Rashtriya Swayamsevak Sangh, it is hard to deny that he focused on corruption when it was a hot issue and quickly moved on when it had served its purpose.

Nearly everyone who was part of that platform with him, from K B ‘Anna’ Hazare to Shanti Bhushan was soon thrown under the bus till the AAP, the party that emerged from the movement, became the personal property of Kejriwal and his long-time associate, Manish Sisodia.

There is no doubt that Kejriwal is sharp, shrewd and resourceful (‘sneaky little fellow’, Captain Amarinder Singh once called him) but he has had little success outside of Delhi except for Punjab, which was virtually gifted to AAP by the ineptitude of the younger Gandhis.

Kejriwal has now worked out that if the AAP is to become a national party, he must repackage it as BJP-lite with more efficient delivery. His own base, he reckons, has nowhere else to go.

The worst thing that will happen is that the Congress will appeal to the Muslim voters the AAP has deserted — but even that will work to his advantage, allowing him to paint the Congress as a pro-Muslim party.

India has seen many Kejriwals. They will come and go. But it is worrying that there are fewer and fewer people of consequence in Indian politics, willing to speak up for liberal values, secular governance or even, common sense.

Even Kejriwal, as astute an opportunist as we have seen in recent years, recognises that some form of Hindutva is the way ahead.

The Congress, which should stand up for the values that India was founded on, is now enfeebled and fighting for survival. The Left counts for very little. And the non-BJP parties appear to have no particular commitment to maintaining India’s pluralistic, diverse identity.

Kejriwal is too much of a flyweight to be the next Hindu Hriday Samrat. But the fact that he feels obliged to try and earn that title tells us something about India today.

It is always instructive to watch the unprincipled opportunists. They always sense which way the wind is blowing.

And judging by Kejriwal’s embrace of Hindutva at its most banal level, it looks as though a thunderstorm is on its way.

Vir Sanghvi is a journalist and TV presenter.