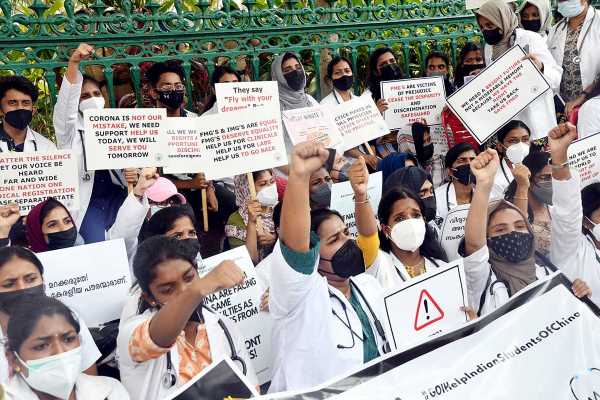 According to the data released by the Indian embassy in China, more than 18,000 were pursuing medical degrees at Chinese universities at the time of the COVID-19 outbreak.

After evacuating these students from Ukraine, both the ruling and Opposition parties in Kerala and Tamil Nadu wanted the state medical colleges to accommodate these students.

While more than 3,000 students had come back to Kerala, the number of students from Tamil Nadu stands at 5,000.

Strongly opposing this move was the Indian Medical Association in Kerala and The Tamil Nadu Medical Council.

“It is premature to take a decision (to accommodate these students in the state medical colleges) right now as it has only been a month since the war started. This is not the right time to take a decision,” Dr Samuel Koshy, President, IMA-Kerala, tells Rediff.com‘s Shobha Warrier.

After thousands of medical students came back from Ukraine due to the war, the IMA at the national level urged the central government to accommodate these students in Indian medical colleges. But IMA Kerala opposes the idea. Why?

Majority of students who came back from Ukraine are from Kerala and Tamil Nadu.

We feel that the national IMA made a premature statement at the beginning of the war itself that these students should be accommodated.

We have a slight disagreement with them because the number of students coming back from Ukraine is too large to be accommodated in the existing medical colleges.

This is the maximum number we can accommodate in the Kerala medical colleges because we have to also consider the number of professors and the number of patients. Otherwise, the standard of education will come down.

The staff student ratio in Kerala medical colleges is already compromised as in the last few years, the Kerala government has taken a decision to admit maximum number of students in all the medical colleges.

Now, 3,000 students have come back from Ukraine. There are also so many students from China who have come back because of the pandemic, and they have been waiting here for the last two years. We cannot accommodate all of them in the already saturated medical colleges in Kerala as the number is so huge.

So, the students from Ukraine cannot be considered as a separate entity as a large number of students have come back from China and other countries.

The Russia-Ukraine war started a month ago only. They may be able to go back once the war gets over.

Another issue is we admit students in all the medical colleges in India based on the NEET ranking. Compared to so many students who missed getting admission in our medical colleges due to a small margin, most of these students coming from Ukraine may have lower ranking.

So, you feel it is unfair to those students who have better NEET ranks but did not get admission in the Indian medical colleges?

Yes, it is unfair to those students with better NEET ranks.

The war may be over in maybe six months. You cannot predict anything.

At the same time, political leaders of both Kerala and Tamil Nadu are talking about giving admission to these students…

This is an academic decision and not a political one. You have to consider the standards of education first.

The first question is, can the medical colleges in these states accommodate all these students?

The second question is, whether there is a shortage of doctors in these states?

According to WHO standards, you need one doctor per thousand people but as of December 2021, the doctor patient ratio is India is 0.74: 1000….

Yes, it is true. But there are six states in India which have more doctors for thousand people, like Delhi, Karnataka, Kerala, Tamil Nadu, Goa and Punjab.

So, if you produce more doctors in states like Kerala or Tamil Nadu or Karnataka, you cannot solve the problem of states like UP or Bihar or Jharkhand where there are less number of doctors.

Only if those states start more medical colleges, you can address the shortage of doctors in these states.

The fact is, the shortage of doctors in India will not be solved by accommodating these students in Kerala or Tamil Nadu.

Only if the states with lesser number of doctors start their own medical colleges can you solve the problem.

India is a country where the doctor patient ratio is less than 1 per 1000, but thousands and thousands of students from India go to China, Russia and Ukraine to study medicine. How can we solve the problem? By starting more medical colleges?

It all depends on the attitude of the state governments.

I will give you the example of Kerala. Many students from Kerala go abroad to study medicine because of many reasons.

One, they have lesser ranking in the NEET examination.

At the same time, they can study in those countries by paying a fee of Rs 20 lakhs-Rs 25 lakhs (Rs 2 million to rs 2.5 million) for the entire course. This is very much lower than what the private medical colleges in India are charging.

That’s why many students from India are going to China, Ukraine and Russia. The fees are much less there while the fee structure in the private medical colleges in India is exorbitant.

There are also students who want to migrate to other countries and practice medicine there.

If the government wants to see that all these students study in India, they should see to it that fees in Indian private medical colleges, are cut down.

There should be more government medical colleges, but not all over India. They should start more medical colleges in states like Bihar, UP, Jharkhand, etc where there is a shortage of doctors.

Another reality is, those who study in Kerala or Tamil Nadu are not going to practice in Bihar or UP.

And those who are studying in Bihar or UP are not coming to Kerala to practice medicine.

Without knowing the local language, nobody can practice medicine in a place.

How do you compare the standard of medical education in India, and countries like China, Russia and Ukraine?

That’s why Indian government has made it a policy that those students who come back to India from these countries after completing house surgency, have to undergo a year of internship in India, and then write an examination. It was reported that only 16% of these students pass the examination in India….

It is true. That shows the standard of education imparted there. The examination is based on Indian standards, which majority of the students find it difficult to pass,

Without fulfilling Indian standards, how can they practice in India?

Do you think something like that is possible for the students from Ukraine if the war prolongs for a long time?

You cannot predict about the war right now. It may end soon, or it may prolong.

The only thing we can do is, wait and watch. One or two months is not going to decide their future.

That’s why you cannot take a decision in one month as it will be a premature decision.