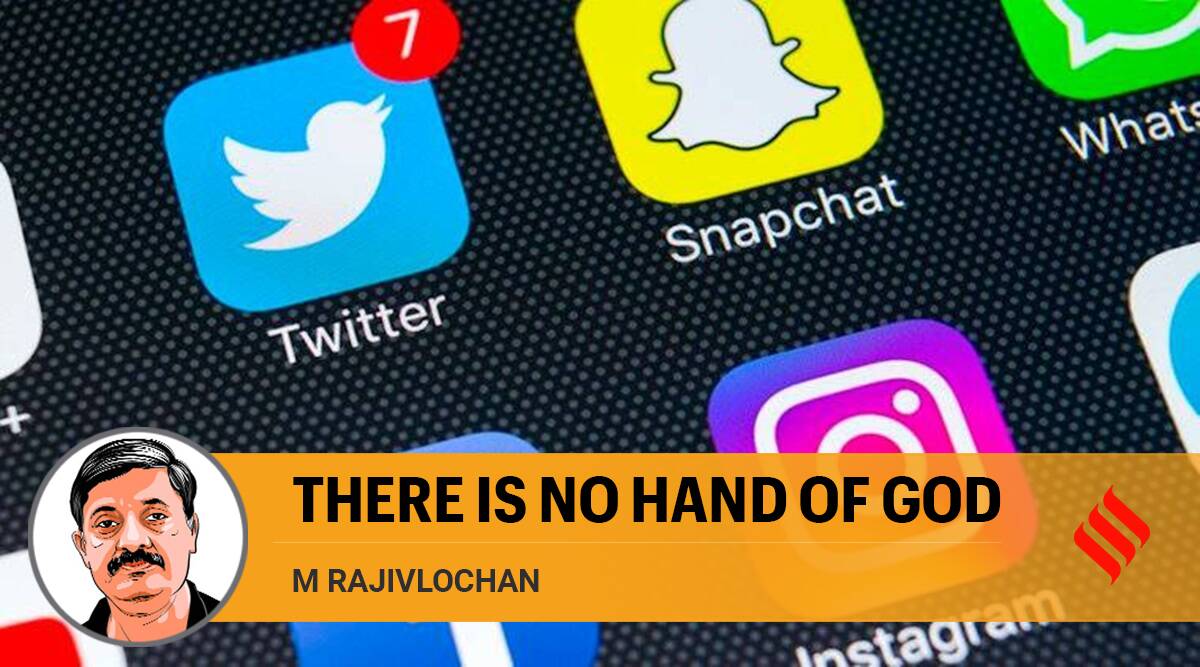 For individuals to be held accountable is not only very new for Indian society, it goes against the most dominant grain in the history of thinking and decision-making in the Indian subcontinent. Social media may manage to do something which governments and courts could not. Ever since Twitter tagged Sambit Patra’s tweet on the alleged Congress toolkit as “manipulated media”, it would seem that enforcing “good behaviour” is now part and parcel of the job of social media managers.

This is an entirely new phenomenon. Much like a global school teacher who enforces good behaviour on wayward children. The most surprising thing is that people are accepting such disciplining.

Even the gods, exasperated parents’ last choice of authority in earlier times, have found their role eroded. “God will punish you if you do wrong” is a phrase that has gone missing from the present-day parents’ lexicon.

Come to think of it, people have stopped holding the gods responsible for most things. Perhaps for the first time in decades, even centuries, people have increasingly assumed responsibility for what is happening to them instead of blaming it on the gods.

The devastating waves of Covid in India were blamed, depending on your mood and political predilections, variously on Narendra Modi, Kumbh, elections, etc. Not a single god got blamed. Gods weren’t invoked even for finding a way out of the pandemic. Rather, the focus was on ensuring social distancing, inoculation, wearing of masks and, some efforts on the part of the government to reach relief to those in distress.

To me it seems that this is a new development in our society, with people exercising moral choices more consciously. Which, in turn, will also result in greater stresses for an individual. Especially if we remain a society where success matters, kids are judged on whether they have topped the class, and we continue to differentiate between our young people on the basis of how well they perform in highly structured tests rather than in real life.

This business of creating a society where individuals are held accountable for their failures is not just very new, it also goes against the most dominant grain in the history of thinking and decision-making in the Indian subcontinent. Free will isn’t the dominant theme in India. Obedience and its inverse, disobedience, is.

The Mahabharat, the largest compendium of moral tales in India, places the argument for free will in the mouth of Draupadi, the one who has been most wronged. She exhorts her husband Yudhisthira to pick up arms in the Aranyaka Parva. The good fellow that he is, Yudhishthira refuses. Instead, he counsels patience and faith in God. Anger, he says, is the root of all evil. Draupadi’s exhortations to exercise free will in favour of justice get rejected. Even Krishna comes across similar inaction from Arjuna. Krishna’s entire discourse in the Bhagvad Gita, is about multiple arguments to convince Arjuna to pick up arms, perform action. Finally, he has to resort to a direct order. When all else fails, he commands Arjuna to surrender himself to God and blindly obey the directions of a superior being to fight for a good cause.

Given that such a social paradigm underlies Indian belief systems, it is a vast and refreshing change to notice that people today refuse to bemoan the gods and an evil fate for the pandemic. The numerous recriminatory discussions on social media about oxygen plants, vaccine production, Modi’s responsibility and tricks to survive the pandemic — these are new trends. How best to beat the virus through human effort — this is a new thing.

While more and more people accept responsibility for their fate, the counter trend that we see is of ever stronger social orthodoxies being dictated by new corporates. Till a few years ago, the worst that might happen to an individual, apart from natural disasters, was to be fired from a job, fail to get a promotion, or to have your spouse abandon you. Today, the greatest calamity that might befall an individual is to be banned from social media platforms for what is deemed to be an offensive post. To be banned from social media means an end to your virtual social existence. Donald Trump experienced it, as has Kangana Ranaut.

And the ban need not be for people who were using social media to bring about some sort of counter-revolution. A recent report in the Wall Street Journal tells us that Colton Oakley was banned from posting on Facebook for three days for ranting about student debt; Alex Gendler was banned for sharing a link to a Smithsonian magazine story about tribal New Guinea; and Nick Barksdale, a history teacher, was banned for telling a colleague, “man, you’re spewing crazy now!”

This column first appeared in the print edition on June 9, 2021 under the title ‘There is no hand of god’. The writer is professor, history, Panjab University.