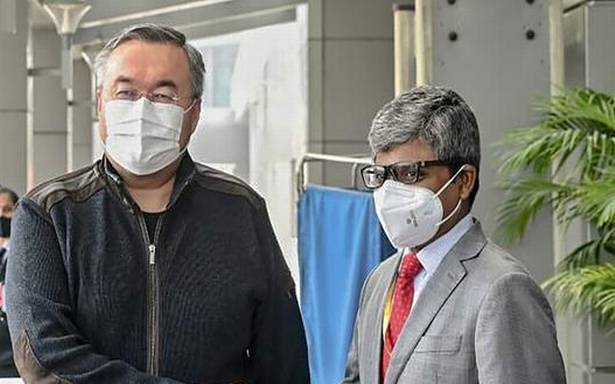 External Affairs Minister S. Jaishankar will host the India-Central Asia Dialogue on Sunday, with five Foreign Ministers from Kazakhstan, Kyrgyz Republic, Tajikistan, Turkmenistan and Uzbekistan arriving in Delhi ahead of the one-day conference.

The conference, which marks the 3rd edition of the dialogue is expected to focus on trade and connectivity to the region and developments in Afghanistan. Of particular interest will be plans to intensify discussions on the Chabahar port route between India and Central Asia, which has not been actualised yet.

The Government is also expected to receive formal responses from the five leaders during the visit, all of whom India hopes to invite as chief guests to the Republic Day celebrations.

Ahead of the dialogue, Mr. Jaishankar met his Tajik counterpart Sirajuddin Muhridin, who is on a bilateral visit to Delhi as well. Tajikistan has taken the toughest line on the Taliban regime and hosts members of the “National Resistance Force” headed by Ahmed Massoud and former Vice-President Amarullah Saleh.

The Tajik Government also helped India keep its transport aircraft in the Dushanbe airport during the evacuation of Indians from Afghanistan after the Taliban takeover in August, when the IAF had airlifted about 565 Indians and Afghan minorities from Kabul.

“I would like to publicly thank you for the tremendous support that you gave us during the evacuation of Indians from Afghanistan in August and September, both Indians as well as some members of the Afghan minority community,” Mr. Jaishankar told Mr. Muhriddin in his opening remarks adding that as neighbours of Afghanistan, both nations have been “very concerned at the developments there”.

Significantly, the Dialogue on Sunday coincides with Pakistan hosting a special donor meeting on Afghanistan in Islamabad, which will include representatives of the 57-nation Foreign Ministers of the Organisation of Islamic Countries (OIC) and the nominees from the U.S., Russia, China and the European Union and Taliban Foreign Minister Amir Khan Muttaqi.

Level of cooperation with India

All five Central Asian nations are OIC members but their Foreign Ministers have chosen to attend the meeting in New Delhi instead, indicating a level of cooperation with India on Afghanistan that was highlighted during the Delhi Regional Security Dialogue of central Asian countries, Russia and Iran hosted by National Security Advisor Ajit Doval in Delhi in November.

The previous meeting had also coincided with a meeting of the “Troika plus” grouping of U.S.-Russia-China and Pakistan held in Islamabad to discuss Afghanistan.

The Central Asian Ministers are expected to hold bilateral meetings with Mr. Jaishankar after the conference and pay a joint courtesy call on Prime Minister Narendra Modi before they leave on Monday.

“The holding of the annual meetings of the India Central Asia dialogue is symbolic of the interest on part of all member countries for greater engagement between them in a spirit of friendship, trust and mutual understanding,” MEA spokesperson Arindam Bagchi had said during a briefing this week where the dialogue was announced.