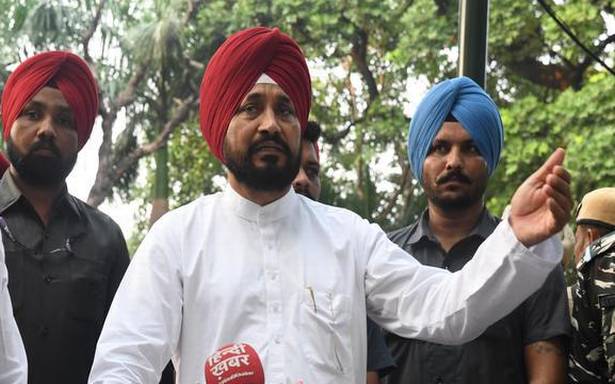 On the day he assumed charge, Punjab Chief Minister Charanjit Singh Channi conveyed unambiguously that his government is of the poor, for the poor and with the poor and it will pay attention to the common man’s problems.

A little over 10 days into the new government, the Chief Minister’s actions seem to be in consonance with his words, leaving a stamp of his “common man CM” style of working in sharp contrast to his predecessor Amarinder Singh, who was often charged with adopting a ‘royal’ (maharaja) style of working and remaining ‘inaccessible’ to not just for the public but even for his MLAs and other party leaders.

Not only this, the soft-spoken Chief Minister — who initially was “over shadowed” by the presence of State president Navjot Singh Sidhu giving an impression that he could be a “rubber stamp” head of the government — is seen to have established himself as an assertive leader, putting at rest of all likelihood that Mr. Sidhu would be a “super CM”.

The appointment of senior officials like the Advocate-General and the DGP (additional charge) of his choice — that eventually triggered the resignation of Mr. Sidhu — only shows the growing self-confidence of the Chief Minister, who is learnt to have strong backing of the central leadership.

As crises deepened in the Congress with the resignation of Mr. Sidhu triggering panic in the party, Mr. Channi (58) exhibited a calm posture — at no time he gave an impression that the situation was grave or out of control. In fact, he firmly conveyed the message to a miffed Sidhu that while he is willing to talk and resolve all issues, it should be remembered that the party and its ideology are supreme and the government pursues the ideology of the party.

The party’s increasing confidence in Mr. Channi could be gauged from the fact that instead of rushing any leader from Delhi, the central leadership asked him to resolve all by himself the emerging crises in the backdrop of Mr Sidhu’s resignation.

While on the one hand he has been dealing with the party chaos, on the other hand in the run up to 2022 Assembly elections, which are barely a few months away, the Chief Minister has been busy in overhauling the image of the government from the earlier ‘maharaja’ style of working to “people’s government”.

Mr. Channi has been making all-out efforts in reaching out to people visiting especially the downtrodden sections across the State, besides making pro-poor announcements.

To express solidarity with the families of farmers who lost their lives during the ongoing agitation against the controversial farm laws, the Chief Minister himself handed over the appointment letters of government jobs to the next of kin of a few farmers by visiting them.

As reports of attack of “Pink Bollworm” on cotton crop emerged, Mr. Channi along with Deputy Chief Minister Sukhjinder Singh Randhawa travelled to the cotton belt in the Malwa region. The purpose, he said was to convey the message that the government was firmly behind the farmers in the hour of crisis.

During his visit, the Chief Minister spotted a newly married couple at village Mandi Kalan and stopped his vehicle to convey his best wishes to them. He also recently performed Bhangra (Punjabi folk dance) with students at an event in Kapurthala.

To woo the economically weaker sections, he announced waiver of the entire outstanding default amount of domestic electricity bills up to two kilo watt load. To provide easy access to the elected representatives such as ‘Sarpanches’, municipal councillors etc., the Channi government decided to issue an entry card from the office of Deputy Commissioner or Sub Divisional Magistrate concerned and the holders of such card would be allowed hassle free entry in State government offices and civil secretariats in Chandigarh. Also, to put an end to the ‘VIP’ culture, he has asked his Ministers to keep their security personnel at the barest minimum as per the guidelines as he had already announced to curtail his own security.

Due respect to elected representatives

In the Capt. Amarinder-led government, party MLAs used to often complain that bureaucracy had been made ‘powerful’ while they hardly had a say in the governance. To keep such grievances at bay, Mr. Channi told senior officials firmly that due respect should be given to Ministers, MLAs and elected representatives.

“I am soft and gentle, but please don’t mistake my gentleness for something that will let inaction go unnoticed,” he said.