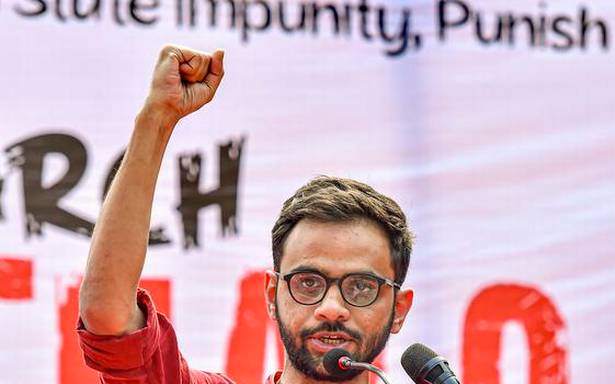 Former JNU student leader Umar Khalid, arrested in the northeast Delhi riots conspiracy case, told a local court on Friday that the charge sheet against him contained hyperbolic allegations without any factual basis.

“The charge sheet is a result of the fertile imagination of the police officer who drafted it and the witnesses are procured … He is not writing the script of The Family Man [a famous web series starring actor Manoj Bajpayee],” senior advocate Trideep Pais, representing Mr. Khalid, contended while seeking bail.

Mr. Khalid, arrested on September 13, 2020, is facing charges under the anti-terror Unlawful Activities (Prevention) Act (UAPA) for allegedly being one of the ‘masterminds’ and one of the main conspirators as well as instigators behind the riots in northeast Delhi last year.

Mr. Pais described the charge sheet as figment of imagination of the police referring to a line which stated that Mr. Khalid kept a safe distance from Delhi as he knew that it would be thrown into the fire.

“The last person who travelled with someone and got into this officer’s head was Voldemort from Harry Potter,” the senior advocate quipped.

Mr. Pais further argued that several statements carried in the charge sheet could not be relied upon while considering his bail. “There is no way these statements are consistent with each other and meet the test under the UAPA,” he argued.

Mr. Pais said there was nothing in Mr. Khalid’s speech that was seditious, however, public opinion was being shaped by the nature of language and allegations in the charge sheet.

The court will hear the bail plea again on September 6.

Earlier, the Delhi police had stated that Mr. Khalid cannot claim parity with other accused — Devangana Kalita, Natasha Narwal and Asif Iqbal Tanha — who were released on regular bail.

The Delhi police said the Supreme Court, while hearing the appeal filed by them against the judgments granting bail to the three, had clarified that these judgments “shall not be treated as a precedent and may not be relied upon by any of the parties in any of the proceedings.”

“So, these judgments cannot be cited and relied upon by the applicant/accused [Mr. Khalid] in the instant case,” the Delhi police said.