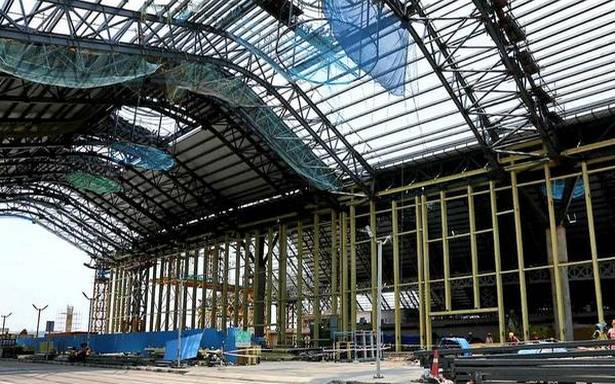 Phase I to be completed by the end of the year

The city airport’s phase II modernisation project has been hit by a delay once again because of the pandemic and the lockdown, and a part of the new integrated terminal is likely be opened by the end of the year.

The construction on the new integrated terminal, sprawling over 1,97,000 square metre, was started three years ago with an estimated budget of ₹2,500 crore, and was to be constructed in two phases. The entire work was to be finished by the end of this year. But early last year, as the lockdown came into place, construction was affected, and subsequently resumed when relaxations were gradually announced. In December, it was estimated that phase I, a part of the new integrated terminal, will be completed in six months.

Officials of the Airports Authority of India (AAI) said with the second lockdown in place, work had once again slowed down and expected the terminal to be completed only by coming December. “The main issue was getting workers. This lockdown too we are progressing with the construction utilising a small workforce, and the workers decided to head home. Only after there are considerable relaxations, will we be able to get back the full workforce and finish the remaining work,” an official said.

The construction of the roof structures were on now, he added. The terminal was designed in such a way that both domestic and international were linked — a single building with international operations at the centre and the domestic ones on both sides.

This phase II modernisation plan was mooted with the aim of increasing the airport’s capacity as it was congested due to high passenger traffic. However, the airport has been handling fewer passengers over the past year.