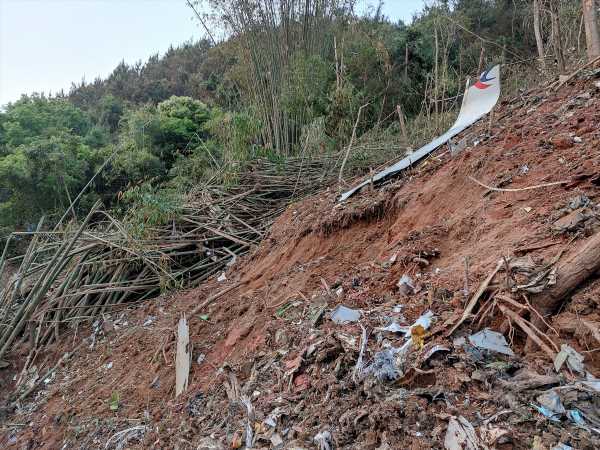 One of the two black boxes of the crashed China Eastern Airlines plane was found on Wednesday in “severely damaged” condition by rescuers combing the site in vast forest mountainous area in southern China, amid fears that none of the 132 people on board survived.

Two days on, distressing videos have emerged showing the Boeing 737-800 on a domestic flight nose-dived into the mountains on Monday crashing with an explosion leaving its debris in a vast forested area making rescue efforts difficult.

A black box, which officials said is believed to be the cockpit recorder of the crashed passenger plane, was recovered by rescuers on Wednesday.

Mao Yanfeng, head of the aviation accident investigation centre of the civil aviation administration of China, told the media at Nanning, provincial headquarters of Guangxi from where the rescue operations were being directed by officials, that the black box was “severely damaged.”

“We hope to retrieve both black boxes of the aircraft soon and then send them to professional labs for decoding,” Mao said, adding that this is crucial to finding the cause of the crash, state-run Xinhua news agency reported.

The crashed airliner had two black boxes, one in the cockpit and one in the tail to record various data, according to the official media in Beijing.

The search for the black boxes is one of the key tasks required by the investigation team.

Aircraft black boxes are generally in bright orange-red so they can be found quickly after a flight accident.

They are built to withstand explosions, disintegration, high temperature combustion, immersion in water and other damage, and the battery lasts for about 30 days.

Rains complicated the rescue and search efforts earlier on Wednesday. However, the search for the 132 people on board the aircraft and the other black box is underway. There is no official word on their fate.

On Wednesday afternoon, rescuers used professional equipment to detect the underground area of the crash site and even expand, the official media reported.

Parts of the wreckage of the aircraft and some human tissues were recovered, officials said.

Meanwhile, the crash of the China Eastern Airlines flight MU5735 increasingly turned intriguing as new data suggests that plane pulled up in its first dive before second one sent it crashing.

After climbing briefly, a second high-speed dive began, sending the plane into the ground 30 seconds later.

“Flight data provided by an air traffic monitoring service has depicted a battle for control of China Eastern Airlines flight MU5735, suggesting the plane pulled out of a 22,000 foot nosedive and briefly started climbing before a second dive sent it crashing into the ground,” the report said.

Twenty seconds into the dive, the rate of descent slowed, and over the next 45 seconds the dive was further arrested until the plane levelled off 7,425 feet above the ground. It then began climbing.

But respite from the unfolding disaster was apparently brief.

About 15 seconds later, at 8,600 feet, the plane went into a second dive, the Post reported.

About 30 seconds later the plane slammed into the ground, in a wooded area of Teng county, near Wuzhou city. The final piece of data from the plane’s computers was sent at 2:22.35pm at an altitude of 3,225 feet, the report said.

In a blog post, Sweden-based FlightRadar24 said its data came directly from the aircraft’s computers and sensors.

Chinese investigators say the weather was normal at time of the crash and the nine-member crew were in good health.

Sun Shiying, Chairman of China Eastern Airlines Yunnan Co. Ltd, told the media that three pilots of the aircrew were all in good health with qualified licenses and experience.

The pilots performed well at work and had harmonious families, he said.

The weather was normal and there were no hazardous weather conditions when the plane with 132 people aboard crashed in south China’s Guangxi Zhuang Autonomous Region, an official told a news briefing on Wednesday.

According to the air/ground communication records between the aircrew and air traffic controllers, they had maintained normal communication since the plane took off from Kunming until it suddenly dropped altitude en route to its destination, Mao Yanfeng said.

In terms of the flight crew, there was one captain and two co-pilots. All three pilots had flight licenses and health certificates within the validity period, with good health and complete flight experience, Sun said.

“From what we know at present, their families were in harmony,” Sun said.