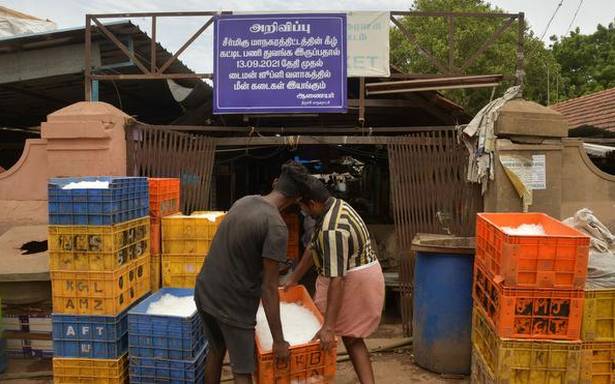 The Corporation has made it clear that fish and mutton stalls will no longer function at the existing building, which was said to have been constructed about 50 years ago, by putting up a notice that the traders could henceforth conduct business at Diamond Jubilee Bazaar.

Those among the traders who have had a long-standing association with the fish market, are a worried lot.

“It is hard to digest that the 20 square feet stall that fed my family for five decades will be razed down. I am sentimentally attached to it,” says a 60-year-old fish trader.

Though it was announced that the market would not function from Monday none of the traders have so far shifted operation to the alternative site as yet. However, some agree that they have no other option but to shift their business to a new location in a few days.

“We cannot drag the issue further. We want an assurance that all existing traders will be accommodated in the new building. Though we have been demanding it for long, the officials have not given any assurance,” says another trader.

A senior Corporation official told The Hindu that the new modern meat market to be built at an estimate of ₹ 13 crore would address all issues faced by customers and traders. The existing market had served the people for more than 50 years and it was in a dilapidated condition. It would be demolished any time so as to start the construction work.

The new meat market would be built on 25,000 sq ft at the same spot, where the current market was located. There would be 148 stalls and it would have two floors with separate provisions made for fish, mutton and chicken traders. An arrangement would be in place for parking 200 two-wheelers. There was no cold storage facility in the existing building but the new building would have a cold storage facility for fish traders. Establishing a waste disposal mechanism was also part of the plan.