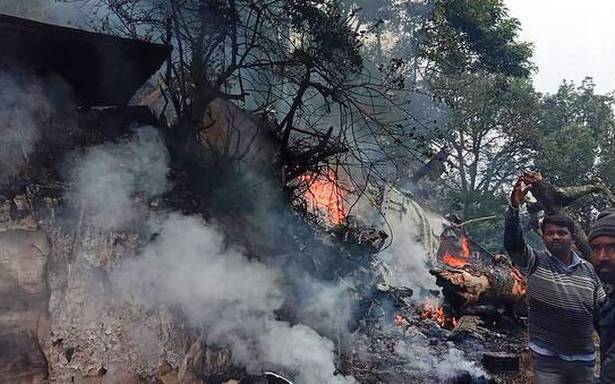 The Ministry of Civil Aviation in October had proposed an Emergency Response Plan (ERP) in all States to deal with helicopter accidents or emergencies, including making contingency documents available to all districts. It was reiterated that the focus of the ERP should be on managing a crisis by covering aspects of who to contact, how to act and what resources to use.

The guidelines on safe helicopter operations noted, within the limits inherent in operating at new helipads, the potential for accidents required that crash rescue and firefighting responded effectively to prevent serious injury or property damage. While it would not be practicable to train personnel to respond to a full-fledged aircraft fire, “the response of the local fire department should be geared to contain fires within their capability of training and be able to rescue survivors of a crash.”

The civil registered helicopter fleet in India is presently about 250 helicopters of which Government and Public Sector Undertakings operate 26.

Reiterating the primary safety aspects, the advisory said prior to any flight, every aircraft movement should obtain a flight plan clearance, receive meteorological and Air Traffic Control briefing by the pilots and pre-flight breath-analyzer check for the crew at the first departure point of the day.

In case the required medical facility for breath-analyzer check was not available at the first departure point, post-flight check for pilots could be undertaken on landing except in the case of VIP flights where the pre-flight check was compulsory.

The advisory noted that during hovering prior to landing and at take-off, a helicopter could generate a rotor downwash wind that could easily exceed 100 kmph for a medium sized aircraft.

“The wind force is sufficient to cause the topsoil to be whipped into a heavy dust cloud and debris to be blown away with force, uprooting even loosely secured objects in vicinity. This has caused accidents due to loss of visual cues to the pilot, entanglement of objects in rotors, loss of engine power due to dust/debris ingestion and even injuries to bystanders who otherwise were well clear of the helipad.”

The safety guidelines also had a check-list for the district administration, Police, Revenue and Health departments for helicopter operations. Following up closely on the guidelines, the Directorate General of Civil Aviation issued a separate circular for State governments to follow in VIP flight operations.

The DGCA, India’s aviation watchdog, had issued a circular on November 22, elaborating detailed safety guidelines for aircraft carrying State, Central and foreign dignitaries. The advisory was based on the outcome of investigation of accidents and incidents involving such aircraft operations in the past.

It said there was a need for harmonisation of requirements and guidelines. “It is essential that adequate measures are taken by all concerned to ensure the highest standards of safety for operation of such flights.”

The safety guidelines noted that twin-engine aircraft with good operational capability, reliability and easy maintainability characteristics should be used and its operations be in accordance with the Aircraft Rules and instructions issued from time to time.

The advisory said that Pilot in Command, before commencement of such flights, should familiarise himself with necessary meteorological information required for the intended flight.

“For every flight under Instrument Flight Rules, the Pilot should study the current weather reports and forecast and plan alternative courses of action to provide for the eventuality that the flight may not be completed as planned because of weather conditions. In case meteorological observations and weather forecasts are not available at the point of departure, the pilot shall obtain the same from the nearest meteorological office through telephone or police wireless network or any means he considers fit,” it said.

On the possession of ‘Certificate of Airworthiness’, the DGCA said the aircraft should be inspected and certified prior to flights by the Aircraft Maintenance Engineer.

The advisory added that it was the responsibility of the State Government, and/or owner/operator to make a copy of the circular available to all persons concerned for their information and necessary action.