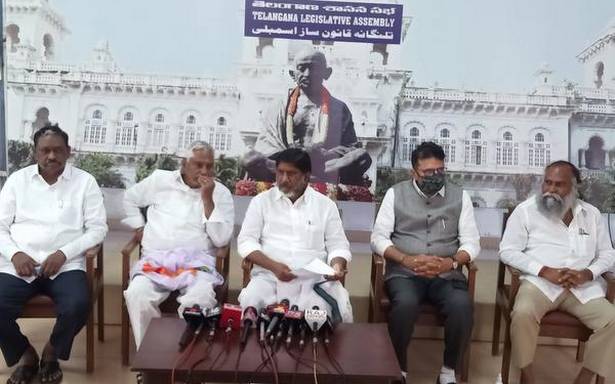 ‘Police should come out of the clutches of TRS govt. and work without bias’

The Congress Legislature Party (CLP), on Sunday, decided to meet Governor Tamilisai Soundararajan and DGP Mahender Reddy seeking their intervention in ensuring that the “police come out of the clutches of the TRS government and work without bias”.

CLP leader Bhatti Vikramarka claimed that the law and order situation in Telangana has deteriorated and they should intervene and set the police back on track. “A series of incidents showcased how the police has succumbed to the ruling party. The developments after the Paloncha family suicide pact, where the Kothagudem MLA’s son is accused, is a reflection of that,” he said.

Mr. Bhatti demanded the government to suspend MLA Vanama Venkateshwara Rao and force him to resign from the Assembly to send a message of confidence to people. His son Vanama Raghavendra is the reason behind the suicide pact of a family and is taken into custody after public pressure, he said.

The CLP leader added that issues like GO 317, paddy procurement, chilli farmers’ crisis, proposed hike in power charges and developments of Paloncha suicide were discussed, and the party has decided to back the people in all these issues. He demanded that GO 317, based on which the recent employees’ transfers were done, should be withdrawn immediately as the transfers were done based on seniority and not local status.

The CLP has also decided to write a letter to the Union government as GO 317 has killed the very spirit of GO 371 that protects the nativity of candidates. In fact, violation of GO 371 was also one of the reasons for Telangana agitation.

Stating that both the State and Central governments played with the lives of farmers on paddy procurement, Mr. Bhatti said that the State government must protect the rights of farmers by announcing support price if the Centre turns a blind eye.

MLC T. Jeevan Reddy ridiculed the government for celebrating Rythu Bandhu and said it was shirking from its responsibility of rescuing farmers from crop losses due to various causes. By providing ₹5,000, the government was denying several benefits to farmers that should have come to them.

The CLP also discussed the politics being played over Prime Minister’s alleged security lapse in Punjab. It said that the BJP was trying to tarnish the image of the Punjab government headed by a Dalit. “The ‘drama’ by Narendra Modi has lowered the image of the Chair of PM.” Mr. Bhatti said none of the earlier PMs played ‘cheap’ politics using the position and reminded how Indira Gandhi never blamed the then Orissa government when she was injured by stone throwers.