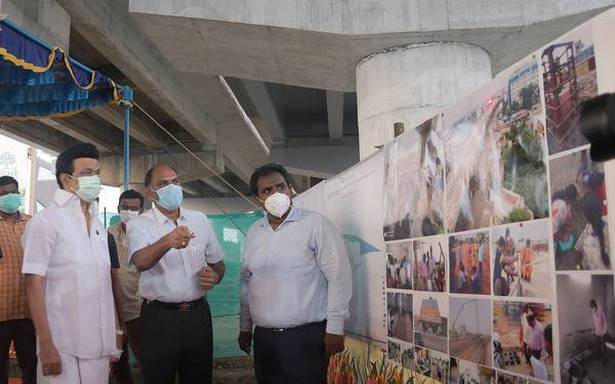 Chief Minister M. K. Stalin, on Friday, inspected a slew of projects under implementation in the city.

He inspected the grade separator work under way on Inner Ring Road – Sivaganga Road junction. It is being constructed at a cost of ₹53.12 crore to make the junction safe for vehicles plying on multiple directions.

Out of the 28 spans, works have been completed on 26. The Chief Minister instructed the officials to complete the work by year-end.

Later, he inspected the high-level bridges under construction across Vaigai river on Kurivikaran Salai (₹23.17 crore) and at Obulapadithurai (₹23 crore).

Inspecting the Smart Cities Mission work on beautification of Vaigai river banks, Mr. Stalin planted a sapling at a park coming up under the project at a cost of ₹84.12 crore.

Encroachments on both the banks between Raja Mill Road and Kuruvikaran Salai have been evicted and roads laid. Works for pedestrian walk with two parks along with decorative lights have been planned.

Kalpalam across the Vaigai river would get a facelift with paintings related to Sangam literature.

The officials have also planned to lay a walkers path and bicycle lane. The works have been scheduled for completion by January.

Later, the Chief Minister inspected the site where Kalaignar Memorial Library along New Natham Road is to be established. The library will have a building with a carpet area of 2.22 lakh square feet on 2.61 acres of land at a cost of ₹70 crore.