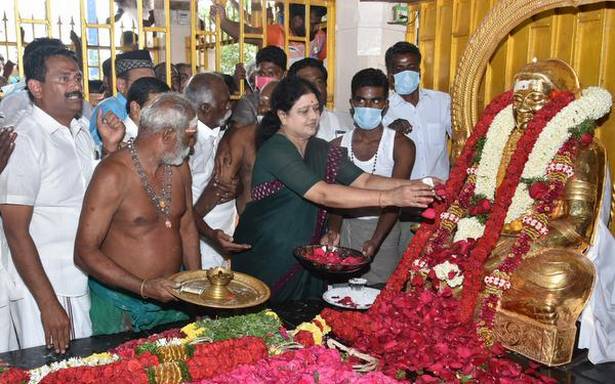 Sasikala pays tribute at the samadhi

Accompanied by supporters from the AMMK and AIADMK, the crowd suddenly turned out-of-control and only after police rushed to regulate it that Ms Sasikala could walk to the memorial. After garlanding the statue, she sat in the corner and meditated for a while.

She later left for Thanjavur by road in the vehicle, which was used by late Jayalalithaa for electioneering purpose, an AMMK functionary said.

At many intersections leading to Pasumpon, enthusiastic supporters of both Ms Jayalalithaa and Ms Sasikala, had pasted huge wall posters hailing them as leaders of the masses.

Meanwhile, the police tightened security measures in and around the Pasumpon village as VVIPs led by Chief Minister M. K. Stalin were expected to visit the memorial to mark the guru puja and the birth anniversary of the late Muthuramalinga Thevar. “We have given specific time slots to all political parties beginning from the 10 a.m. till 5 p.m.,” police officers said and added that only five persons shall accompany the leaders and those with valid passes would be permitted inside the memorial.

The police had also established a special control room here to monitor the movement through CCTV cameras. The surveillance teams are also equipped with drone cameras with high resolution, which was inspected by Mr. Anbu in the evening.

Though the officials insisted on physical distancing and use of masks, it appeared to have been neglected as only very few adhered to the Standard Protocol issued in view of the COVID-19 pandemic.