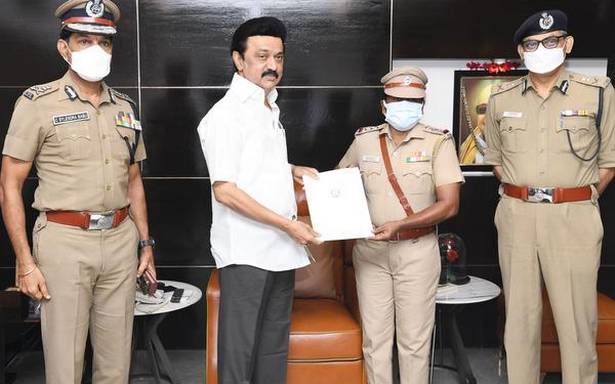 The inspector had found an unconscious man at a cemetery in Chennai and carried him to an autorickshaw to take him to hospital; the man died in hospital on Friday

A day after T P Chatram Inspector of Police E. Rajeswari rescued a man from a cemetery at Kilpauk by lifting him on her shoulders to rush him to a hospital, Tamil Nadu Chief Minister M.K. Stalin on Friday personally felicitated her at his camp office in the presence of senior police officers.

In a message of appreciation handed over to her, the Chief Minister underlined that she had truly realised the importance of the ‘golden hour’ and had swung into action to rescue the man and rush him to the hospital.

The policewoman’s duty, with the sense of commitment and the expression of compassion of the uniformed personnel were commendable, it said and recalled her being an athlete and her act of rescuing several persons during a stampede in Mahamaham at Kumbakonam in 1992.

“Your actions have, on several occasions, been a helping hand of the police for the downtrodden. Your recurring acts of rescuing destitute women and admitting them into government homes and bravely facing persons in conflict with the law have rightly received commendations from senior police officers and words of praise from the general public,” the Chief Minister said in the commendation.

Ms. Rajeswari’s humanitarian action has added to the reputation of the Tamil Nadu Police. “As the Chief Minister, who also heads the Police Department and as someone, who visited the people continuously during the natural disasters to enquire into their needs, I extend my congratulations for your humanitarian act,” it added.

Ms. Rajeswari had, on Thursday, rescued a 28-year-old man who was lying unconscious and was initially believed to be dead. He was later identified as Udayakumar, who had been working as an assistant at the cemetery in T.P.Chatram.

On being alerted by the police control room, she reached the spot and found that the man was breathing. She lifted him up on her shoulders from the ground and carried him to an autorickshaw. He was rushed to Government Kilpauk Hospital. Mr. Udaykumar however, died at the hospital on Friday.