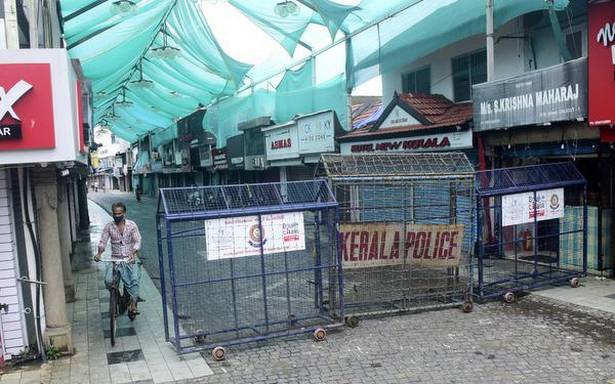 KVVES dares govt. to stop traders from opening on all days from tomorrow

Chief Minister Pinarayi Vijayan has urged traders not to rebel against COVID-19 regulations.

The Kerala Vyapara Vyavasa Ekopana Samiti (KVVES) dared the government to stop traders from opening for business on all days from Thursday. Retail, as per current COVID-19 regulations, is allowed only on alternate weekdays.

The sector has remained closed since May 8, causing severe loss of business and lengthy workforce lay-offs. The KVVES has called for Statewide protests against the “stifling” pandemic regulations on July 14.

Mr. Vijayan said the second wave has not abated. The third one was possibly knocking at Kerala’s doors. The government could ill-afford to allow any relaxation that would potentially jeopardise the State’s fragile pandemic situation.

“We have empathy for traders and can understand their worry. But, if they start on a different path, the government will be constrained to confront them. It is better they (KVVES) realised the gravity of the situation and acted maturely,” Mr. Vijayan said.

Mr. Vijayan ordered District Collectors and District Police Chiefs to talk to traders to prevent matters from coming to a head.

He said the current restrictions would continue undiluted till July 20. The government has extended shopping time till 8 p.m. in localities where the average TPR is below 15%. The retail sector can only open on alternate days.

However, banks can admit customers on all weekdays from 10 a.m. to 5 p.m. Mr. Vijayan said the government would allow electronic shops to open on all days. The weekend lockdown and other allied curbs would remain in place.

(An official said Mr. Vijayan might take a call on July 14 whether to allow textile, furniture, home appliances, jewellery, electronic and vehicle showrooms to open on alternate weekdays. The government is also under pressure from various religious groups, including the Samastha Kerala Jamiat-ul-Ulema, to permit more people into places of worship.)

Mr. Vijayan said the government has imposed triple lockdown and ordered micro-containment measures in places with a more than 15% TPR.