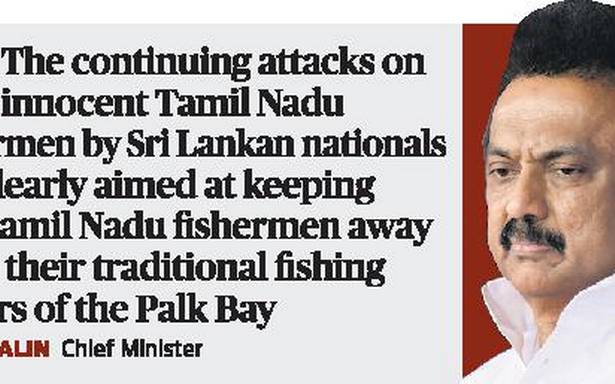 Tamil Nadu Chief Minister M.K. Stalin on Tuesday wrote to Prime Minister Narendra Modi, requesting him to prevail upon the Sri Lankan government not to auction off the boats seized from Tamil Nadu fishermen.

He also wrote to Minister for External Affairs S. Jaishankar, urging that India take up with Sri Lanka the attack on Tamil Nadu fishermen by “Sri Lankan nationals” on January 23.

At the request of the Ministry of External Affairs through the High Commission of India, the State government deputed officials and stakeholders to oversee the disposal of 125 unsalvageable Tamil Nadu boats berthed in Sri Lankan harbours. In the meantime, the media reported about the auction of 105 Tamil Nadu fishing boats scheduled between February 7 and 11.

Mr. Stalin termed it an “unfortunate development” when the India-Sri Lankan Joint Working Group on Fisheries was due to meet shortly. “The above action has created alarm and distrust among the Tamil Nadu fishermen, who have come forward with an accommodative frame of mind to find an amicable solution to this long-pending issue,” he said in the letter to Mr. Modi. Copies of both letters were shared with the media.

The “tearing hurry” to auction the boats without consultations was bound to derail the efforts of the Indian High Commission and the Tamil Nadu government, he said, pointing out that these unsalvageable boats were released by Sri Lankan courts following a due procedure.

“I strongly urge the Government of India to register its disapproval in the strongest possible terms at the appropriate level and to prevail upon the Sri Lankan government to recall the advertisement published by the Department of Fisheries and Aquatic Resources for auctioning the Tamil Nadu fishing boats to which they do not have any legal right,” he said, pleading for the early release of 75 boats and fishing gear seized by the Sri Lankan Navy after 2018.

In his letter to the Minister for External Affairs, Mr. Stalin referred to the attack and requested that India take up the issue with Sri Lankan sternly so that such acts did not take place in future.

Three fishermen from Pushpavanam near Vedaranyam in Nagapattinam district, who went for fishing on their fibre-reinforced plastic boat, were attacked by a group of “unidentified Sri Lankan nationals” while they were fishing 16 nautical miles south-east of Vedaranyam around 9 p.m on January 23. The fishermen were robbed of a net weighing 300 kg, GPS & VHF sets and 30 litre of diesel and attacked. The injured are being treated at the government hospital at Vedaranyam.

“It is observed that the continuing attacks on innocent Tamil Nadu fishermen by the Sri Lankan nationals are clearly aimed at keeping the Tamil Nadu fishermen away from their traditional fishing waters of the Palk Bay. I am constrained to point out that these attacks are disconcerting,” he added.

The issue had become a matter of life and death for thousands of fisherfolk, whose livelihood was under a serious threat, he noted. “India cannot continue to be seen as a mute spectator as the rights of Indian fishermen are repeatedly trampled upon.”