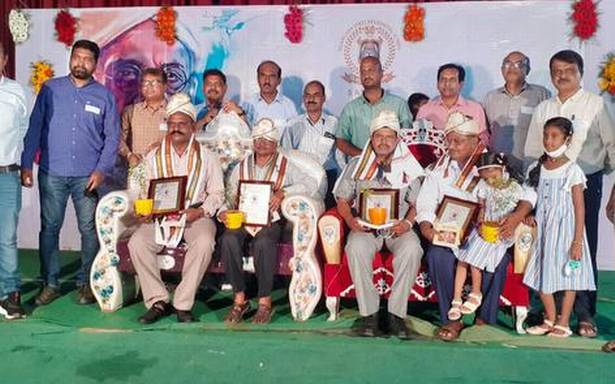 Emotions ran high and pride was all pervasive as teachers experienced the warmth and love of their students.

The stalwart teachers and their students over the last 50 years of the prestigious Telangana State Residential School in Sarvail in Yadadri district gathered to celebrate Teachers’ Day in the remote village that has stood as an example of quality education, being the first residential school in the government sector in the country.

More than 150 teachers from across the State and some from neighbouring states were invited for the felicitation as a respect to their contribution in the lives thousands of students who completed their education at the school and made a name for themselves in society.

The teachers were felicitated amid vedic hymns and students reciting the poems they learnt in school from them. Some were visiting the school after several years and meeting their dear students after decades but the bonding was instant. “Teachers were with us 24×7 and for years as it was a residential school system. So the bond is quite strong and their guidance paved the way for our bright future,” said Rajashekhar Reddy, general secretary of the TSRS Alumni Association that conducted the programme.

Rich tributes were also paid on the occasion to late P.V. Narasimha Rao, the architect of the gurukul system and who established the school as the Chief Minister of Andhra Pradesh on the land donated by Maddi Narayan Reddy. “But for his vision, several bright but economically poor students from Telangana wouldn’t have got opportunity to get quality education,” he added.

The 1984 batch students led by architect G. Sivaleelanand felicitated their teachers with specially designed silver coins marking the golden jubilee celebrations of the school this year.

Surendra Mohan, secretary to Governor Tamilisai Soundararajan; retired IAS officer Dinakar Babu, who are also former students of the school, participated in the celebrations. Mr Dinakar Babu recalled the role played by the teachers in shaping them.