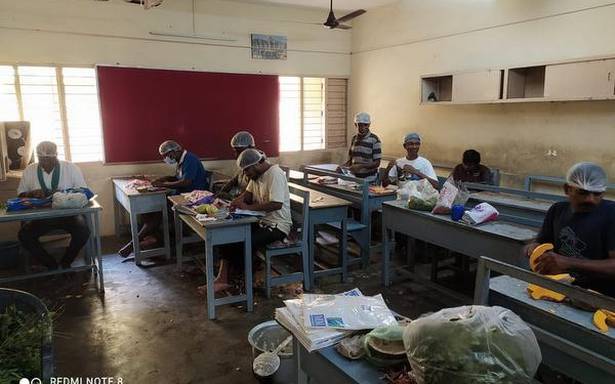 Members of a voluntary organisation cook, pack and distribute food to 30 centres in the city

A goodwill gesture by the school management enabled the Foundation to find space to cook and distribute food to hundreds of families. More than 20 volunteers were at work in the makeshift kitchen attending to the whole range of tasks from cutting vegetables to cooking and packing the food in containers.

“We operated from the space for three days after which we had to move out as the school was planning to re-open,” says Lt Col N Thiagarajan, general secretary, Mastermind Foundation.

Ramesh Raja M, a volunteer and one of the coordinators, points out that their field partners alert them to their requirements, based on which they prepare food.

“November 10 and 11 were busy days for the kitchen team as requirements kept coming in,” says Ramesh.

Lt Col N Thiagarajan says the food prepared at the community kitchens are supplied to more than 30 centres in Chennai and this exercise includes providing food for colonies on the banks of the Cooum river like Bodyguard Colony and War Memorial Colony.

“Our association with the families living here began in 2015, during the Chennai floods. While surveying areas most affected by the floods, I stumbled upon this tenement which was tucked inside and had not received food and other supplies. At one home, I saw a little girl lying helplessly on a bed as her home was flooded with water. We supplied over 200 packets of food and since then we have continued to work with the families,” says Thiagarajan.

The Foundation started offering counselling to these families to help them deal with post-traumatic stress disorder.

“Many of the families had lost their belongings and were even jobless, so as an organisation that works towards promoting mental health, we had to offer this support so that they would live their lives as normally as possible,” says Thiagarajan, who has been raising an army of volunteers. Yoga and other life skills classes are conducted for the children.

On November 12, the Foundation helped people stranded in water logged areas at Perungalathur and distributed more than 300 packs of puliyodharai and sadanam, in addition to bread and milk for children. In another operation, the volunteers rescued 11 families in Mudichur. “We had to press our rescue team comprising fishermen for this as the area had six-feet of water,” says Thiagarajan.

Those involved in the work of supplying food say the main challenge lies in identifying areas where no other groups are rendering this service. He adds,“Apart from our network with other NGOs, we also get alerts from residents and that’s how we go to these areas.”