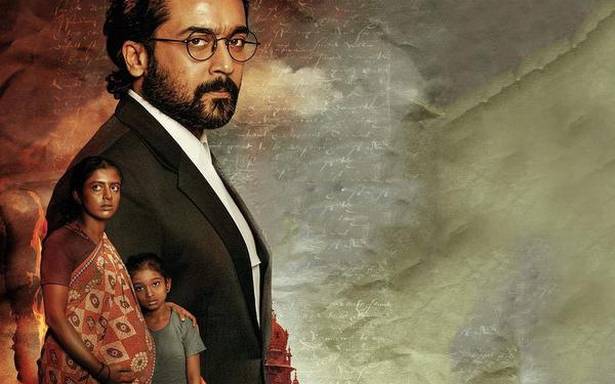 The complainant, Vanniyar Sangam president, Pu. Tha. Arulmozhi, has said the film distorts facts and portrays the Vanniyar community in bad light, with a view to creating communal disharmony

Vanniyar Sangam president, Pu. Tha. Arulmozhi, on Tuesday lodged a private complaint before the Judicial Magistrate II in Chidambaram against the producers and director of the acclaimed film Jai Bhim and Amazon.in, which released the movie on its OTT platform.

The complaint accused 2D Entertainment Private Limited, producers Suriya and Jyothika, director T.J. Gnanavel and Amazon.in of distorting facts and portraying the Vanniyar community in bad light in the movie, with a view to creating communal disharmony.

Mr. Arulmozhi claimed the filmmakers had “wantonly, wilfully and intentionally” portrayed the character of the Sub-Inspector of Police, who is guilty of committing custodial death in the film, as belonging to the Vanniyar community. “The symbolic representations in various sequences in the movie Jai Bhim is per se defamatory and intentional act and targeted to defame and cause greater disrepute to the community,” the complaint alleged.

Mr. Arulmozhi claimed that writer Kanmani Gunasekaran, who helped in providing local language words for the movie, had said that facts were suppressed and the Vanniyar community was defamed. Mr Gunasekaran had returned his remuneration of ₹50,000 to the producers 2D Entertainment Private Limited.

The plea sought a direction for initiating action against Suriya, Jyothika, Gnanavel and Amazon under various sections of the Indian Penal Code, including 153 A (promoting enmity between different groups on grounds of religion, race, place of birth, residence, language, etc., and doing acts prejudicial to maintenance of harmony) and sections 499, 500, 503, 504 and 505.