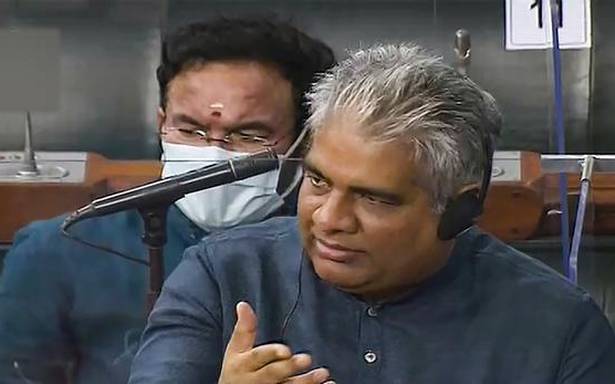 Union Labour Minister Bhupendra Yadav on Saturday said it is the right of the Opposition to protest over issues in Parliament but compromise with the dignity of the House is unacceptable.

Mr. Yadav said this referring to the washing out of the monsoon session of the Parliament. Among other issues, the Pegasus snooping controversy and farm laws had led to repeated disruptions in both Houses of the Parliament.

Commenting on it after completing his 620-km-long "Jan Ashirwad Yatra", carried out in seven Lok Sabha constituencies of Haryana and Rajasthan, Mr. Yadav said the Parliament is run through dialogue and in a dignified manner.

"It is the right of the Opposition to protest against any issue but it doesn’t have the right to take Parliament’s dignity in its hands," Mr. Yadav told reporters in Ajmer.

Protest and disruptions are understandable but not pandemonium, the Minister added.

He said, in the recent Parliament session, the Opposition did not let the Prime Minister introduce members of his new cabinet. The Opposition disrupts proceedings of the House whenever it likes, he alleged.

He said Opposition members throwing rule book at the Chair in the Rajya Sabha during a discussion was unfortunate.

Replying to a question on the protest against Centre’s agricultural laws, he said, "I want to clarify that these laws do not abolish the Agricultural Produce Market Committee in any manner. It provides an arrangement that if the city is overcrowded then another way should be given through a bypass. The laws have given a way to farmers to do more business," he claimed.

He alleged that the protest is taking place to mislead people.

"Even during the farmers’ agitation, the maximum produce has been procured through the mandi system in Punjab. The Congress should see this figure," he said.