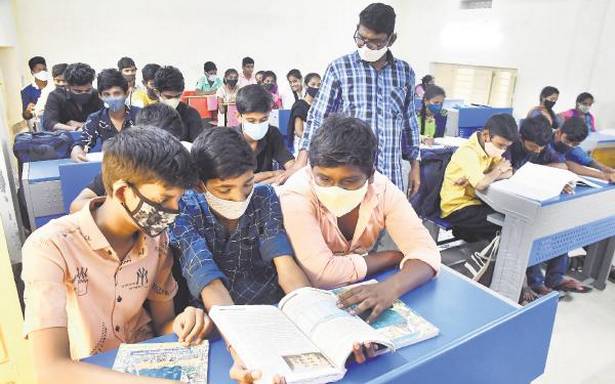 The State government, a month ago, made 75% attendance at school mandatory for students to get the benefits of Amma Vodi scheme and November 8 was set as the cut-off date from when the attendance percentage will be calculated. Things were, apparently, going on at a smooth pace until Omicron, a new variant of COVID-19, hit the headlines. Now, the safety of children has become a serious concern.

There are apprehensions that the State government is not following the Standard Operating Procedures (SOPs) issued by the Central government in the opening of schools. The officials, however, maintain that there is no need to press the panic button “as no cases of Omicron” and very few cases of COVID-19 are being reported in the State.

According to information, the Amma Vodi scheme has been made available to almost 44.50 lakh mothers for sending their children to school. The objective is to address school dropout rate and child labour. The government has been spending more than ₹6,600 crore per annum on the scheme. Though it was announced in January 2020, owing to the COVID-19 outbreak in March 2020, it was in November 2020 that implementation of the scheme was resumed. Later, the pandemic second wave kept the schools shut. With the ‘near flattening of the COVID curve’ now, the government wants to ensure that children attend the offline classes to achieve the objectives of the scheme.

Teacher bodies, however, claim that the State government has not been following the SOPs. The classes should be staggered to ensure the safety of children. “However, there are orders that all classes should be convened every day – not written instructions though but oral,” says the United Teachers’ Federation (UTF) State secretary S.P. Manohar Kumar.

The Municipal Teachers’ Federation (MTF) State president S. Ramakrishna expresses similar views. Overcrowded classes can be seen in any of the municipal areas. The admissions in the government and municipal schools have gone up in the recent past. The facilities, however, do not match the student strength. As per the rules, not more than 35 students should sit in a classroom but 50-60 are being crammed in each room, he alleges.

When contacted, School Education Commissioner S. Suresh Kumar asserts that SOPs are being followed scrupulously across the State. That classes should be conducted in batches was a general instruction given by the Union government. If the student strength is 20-30, there is no need to conduct classes in batches. “We are following the batch system if the strength is 40-45. Also, there is no spike in COVID-19 cases. The health department issues COVID-19 protocols as and when necessary, and we follow them,” he adds.

On the other hand, the majority of the parents are ‘willingly and enthusiastically’ sending their children to school and a host of reasons are being cited for this. Loss of academic year, benefits of the welfare schemes and none to take care of children at home are a few to mention. Mr. Manohar says that parents are worried about the education of their children as already two years passed away with online classes. “Nearly 90% attendance is being recorded in the State government schools,” he says.

The situation is different in municipal schools where 50-60% attendance is being recorded, according to Mr. Ramakrishna.

Experts say that the long stay at home had been impacting the mental health of children.

Vishal Indla, psychiatrist, says that schooling is not just learning. It’s more about daily scheduling, discipline, fitness and learning social skills. More kids are happy returning to school. “The benefit of going to school far outweighs the risk of getting infected. Staying at home for a longer period is a bigger devil. The online classes are not only impacting the quality of life and mental health of children but also that of the entire family, he explains.