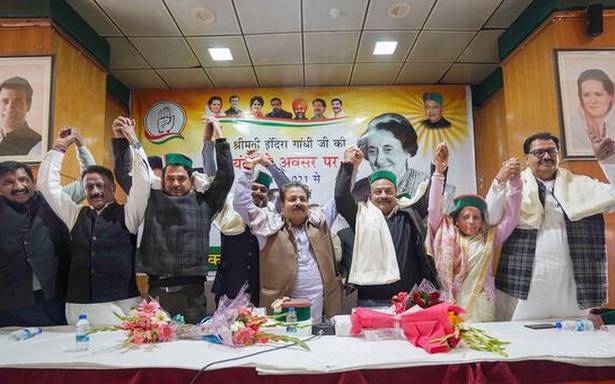 Party is leaving nothing to chance ahead of the Assembly election

Buoyed over its performance in the recently concluded Assembly and parliamentary byelections in different States, the Congress in Himachal Pradesh is leaving nothing to chance ahead of the Assembly election, which is due in 2022. The party has set the ball rolling by increasing the tempo of its electioneering.

To ensure that it continues with its winning streak, the Congress, led by State president Kuldeep Singh Rathore, has kick-started a State-wide padayatra and jan jagran programme to consolidate its support base across all the 68 Assembly constituencies.

In an attempt to strengthen the party, especially in those constituencies where it is relatively weak, the party president has started a padayatra to understand the weak points of the party in the constituencies and prepare a political strategy to beef up electoral prospects. As a part of the jan jagran programme, current and former MLAs of the party across the State have started to reach out to the public to make then aware of the Congress’s ideology and polices, while also exposing the misdeeds of the BJP Government in the State and at the Centre.

“The Congress has won the semi-finals by defeating the BJP in the byelections. Now, we will win the Assembly election in December next year. Congress members have been stimulated to carry on the campaign momentum after the recent win. We are making the public aware about the ill-conceived policies of the BJP, which has caused inflation, unemployment and corruption, and has created hardships for the people of the State,” said Mr. Rathore, who is being credited with the party’s stupendous win in the recent byelection by uniting the party, which was riddled with factionalism when he took over the reins in 2019.

“The people of State have rejected the BJP and have acknowledged the Congress in the byelections. The entire party cadre is motivated right now and wants to ensure that the BJP is uprooted from power in 2022. I have already started a padayatra to visit all those constituencies where we have not been winning for the past few years. The aim is to understand the reasons for our weakness and then prepare a strategy to strengthen the party. There are around 22 Assembly constituencies where we are a little weak and I’ll be visiting all these constituencies in a phased manner over the next few months. In the first phase, I’ll undertake the padayatra in 13 constituencies, four of which I have already covered in the past few days,” Mr. Rathore told The Hindu on Friday.

The ruling BJP in Himachal Pradesh suffered a major electoral setback after its party candidates lost the byelections in all the three Assembly seats and the one parliamentary constituency to the Congress.

The Congress won Fatehpur, Arki and Jubbal-Kotkhai, besides the Mandi Lok Sabha seat.

The BJP’s poor performance in the political circle was being largely attributed to the anti-incumbency factor, price rise and unemployment, which were strongly raised by the Congress during the election campaign.